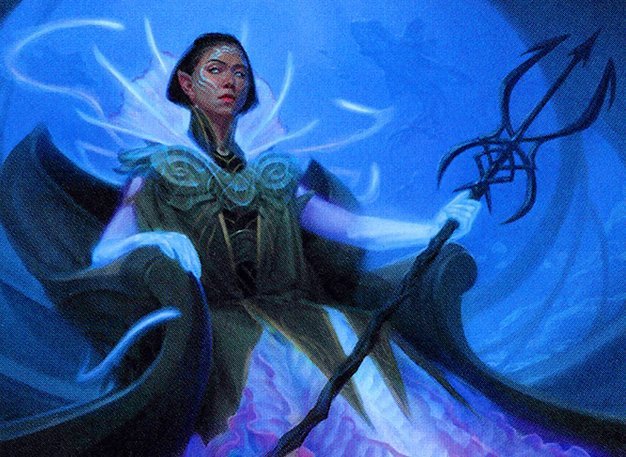 Introduction
Let's look at the first in a series of decks built with the following conditions / restrictions: The first deck presented is within the

archetype. A good tutorial on how to use this type of strategy can be found in the cEDH Manual.

The decklist belongs to the player hyperlink (Lucas Guimarães) and is valued around US$ 40,00 on 12/26/2020. There was a small increase in

from the tests until the publication of this article. Vannifar's ability works as a "one" card combo, so the game plan is pretty consistent: ramp up a bit at the beginning using mana-generating creatures (in turns 1 and 2), summon the commander and protect her for a turn (in turns 3 and 4), then activate the commander and win the game (in turns 4 and 5).
Combo Lines
In order to avoid using more dead cards on the deck, the combo lines culminate in looping some magic through the interaction between

. Usually the combo lines will be something like this: Now let's look at one of the simplest combos to execute, present possible points where other cards can help to correct weaknesses and then present those cards.
The Ladder
The objective here is simple: put Protean Hulk on the battlefield and sacrifice him. Initial condition: Vannifar in the field without summoning sickness. A creature with CMC 1 nn the battlefield (Elvish Mystic in this example). We will put the CMC of the creatures in parentheses. A magic to trigger the Chakram Retriver. Some way to untap Vannifar. The mana required depends on the magic used to trigger the Chakram and the untapper for Vannifar. Steps 7 and 10 are noteworthy. Step 7 requires that you have some additional way of untapping Vannifar. Step 10, perhaps as a much higher order, requires you to spend the turn with the combo on the table. With more than US$ 40,00 to spend on the deck it is possible to solve these problems with other cards, however, let's see some cheaper and, unfortunately, less efficient ways of circumventing these weaknesses.

Before isolating specific cards to correct these problems, it is important to note that the deck was built with the aim of being dense in ways of fulfilling (step 7) or skipping (step 10) those steps. Stem enablers like

seek to serve as enablers of step 7 and be less dead as a card.
Thornbite Staff
The use of

alone allows the combo to be executed completely on the turn itself and without using any additional cards (there is no need to have specific cards in hand). The Staff's untap trigger causes step 7 to not require an additional card. Or even the condition of deviating from step 4 that we assume as always possible. To solve the problem of passing the turn (step 10), note that when sacrificing the

, Vannifar will untap again. Thus, it is possible to include some 0 CMC creature (

in the example) in the Hulk stack and start a new ladder. The new combo, starting from step 10, will be: For the last step, it is possible to notice that it is necessary 2 additional mana to execute the combo on the turn (assuming that

is equipped in Vannifar, otherwise it is necessary to add 4 mana to equip or 6 to cast and equip ).
Memory's Joruney & Reclaim's Loop
Initial condition: deck in hand. Spectral Sailor in the battlefield. "Infinite" mana. Let's choose some magic to loop, how about

: From there, just repeat starting at step 3. Replace

with bounces or pumps to clean the board and attack. The deck runs 3 haste enablers, which is enough to remove all three opponents in a turn.
How to Combat
The deck relies too much on the commander, so it is necessary to keep Vannifar in check. It is good to remember that combos of infinite mana work without the commander, they are just more difficult to establish without her. For the Vannifar pilot it is interesting to note which pieces of hate hinder the deck. Cards like

prevent Vannifar from being activated. The deck countswith a general removal package, usually in the form of bounces. These should only be used as a last resort, although it is a Simic deck, this deck is not a control deck.

The creatures needed to make our staircase reach the

(3) have been mentioned previously. For them to work correctly and linearly, we have to ensure that they are all on the deck, so that no Vannifar activation fails to find a necessary creature. On the deck there are two ways to deal with unwanted cards in your hand. First, we have the instant card

that makes us draw three cards and return two cards from our hand to the top of our deck. There is also the

whose effect of entering the battlefield is equivalent to that previously mentioned, which makes it into a

in the form of a creature. Because it is a creature, it is easily tutored with the help of our commander, which makes its mana cost negligible. However, you must remember of always be careful when this effect will be used, since the cards are placed at the top of your library and not reshuffled in it. Although it is not possible to win in the same turn or the next turn, it is good that the commander is activated as soon as possible so that the deck is shuffled. Cards that give haste are good on this deck because they allow the combo's resolution to happen on the same turn as it hits the table.

are the honorable mentions in this category. The boots are old known to Commander players, can be tutored via

and equipped for free. In turn, the enchantment, in addition to giving haste to the creature to which it is attached, also serves as a way to untap it. Finally, the Bridge has the ability to boost all of its creatures that are on the battlefield at the time their ability is activated.

Our list runs a large number of mana dorks in order to get into a comfortable position as quickly as possible to perform our victory combo. Cards like

and the like are great at the beginning of the game for facilitating the commander's entry and are part of the game plan.

can also function as a ramp if you have some mana dork in the battlefield. One of the best creatures for the deck, however, is

. Because it is a permanent untapper, it can function either as a ramp, untapping land or a dork, or untapping commander so that it can be activated again.

In general, it is necessary to keep the commander on the field for one turn so that our game plan can reach the end. Thus, we run a large number of ways to protect it.

and many others are spells capable of giving protection to our creatures that are already on the field.

is one of the deck's honorable mentions because it brings with it the flexibility to protect one creature or to protect all of our creatures that would be the target of spells. But in order to protect something in the field, we must first summon that something. So we run a considerable amount of counterspells on our deck. We opt, mostly, for low cost spells, usually with some condition (usually some cost that the opponent must pay) for the counter to be successful. As it is a deck focused on going off quickly, it does not seem absurd to think that the amount of mana available to all players is small. Thus, we assume that the probability that a player will answer some of his creatures is low and still have mana available to pay the fees applied by our counters.

This hand gives us all the important ingredients to make the winning strategy work. Among mana dorks and lands, it has what it takes to summon our commander early. It has protection, in the form of

and get our combo pieces. Finally, it is capable of giving haste to one of the pieces needed to generate infinite mana. With this hand it is possible to win in turn 4.

A hand with 4 lands is better than a hand with no lands on that deck. With two mana dorks and a creature untap spell, these cards are able to summon our commander as early as turn 3. The lack of haste can be corrected on the turn following the commander's entry using her ability to sacrifice the

in search of a

that would, in turn, search for

. That done, we can pass and go in search of victory in the next turn, that is, with the prospect of victory in turn 5. Two-land hands are also clearly viable hands. In this one we have a drop 1 that can help Vannifar to start her chain of tutors, we have an acceleration in the form of

, which even helps when generating infinite mana. We have specific protection against removals and a counterspell, in addition to also having the

playing the role of untapping our commander. With this hand and drawing more lands, it is possible to win on turn 5.

This hand has everything wrong. One land (different in color from most spells), no ramp, no untapper, two creatures that do not help us at all initially, only reactive spells and one of the creatures on our activation ladder.
Conclusion

Since the deck has very convoluted and a little fragile combos, it is necessary to be quite comfortable with all the lines before adapting to the deck. It is not the kind of deck that you lend to your friend who has learned to play in an FNM right now.

The deck is quite consistent, manages to emerge victorious frequently and has ways to react to opponents' interactions.

The deck operates with a linear and easy to predict strategy, which makes it simple to stop it. In addition, it is necessary to have a strong knowledge of the other decks at the table in order to plan your plays accordingly.
Goldfishing
Since the deck falls within the combo archetype, the average winning turn is a good metric to watch.

Mulligan for how many cards

: 0.65 Naturally, the deck is slower than its alternative without a budget limit, but it is also extremely consistent. Usually the combo's turn was also performed with some protection in hand. This ends the first article in the series. I will be back soon with another budget deck in a new archetype ... 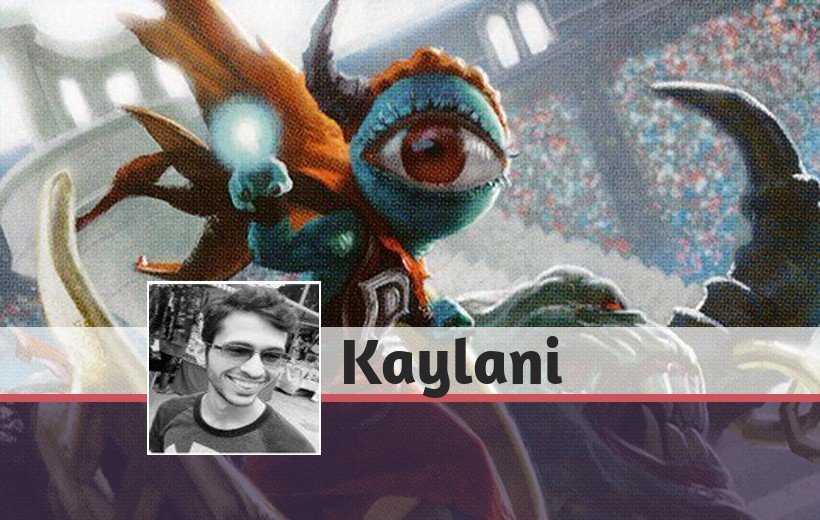 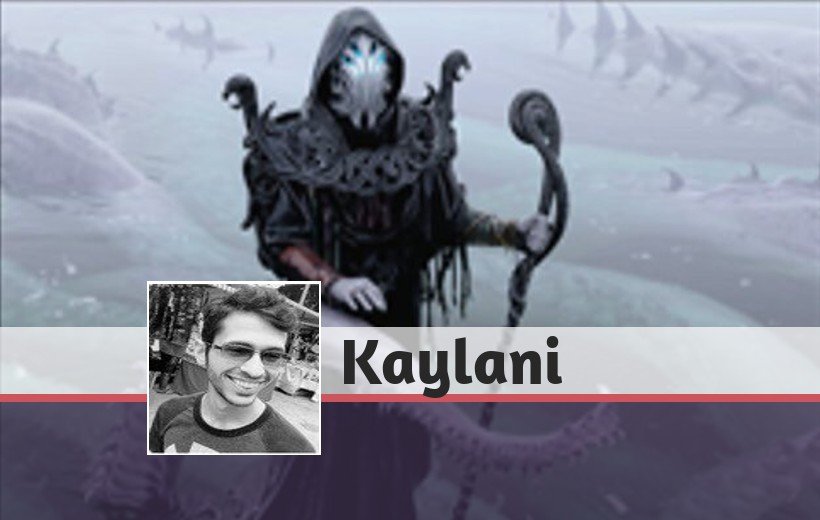 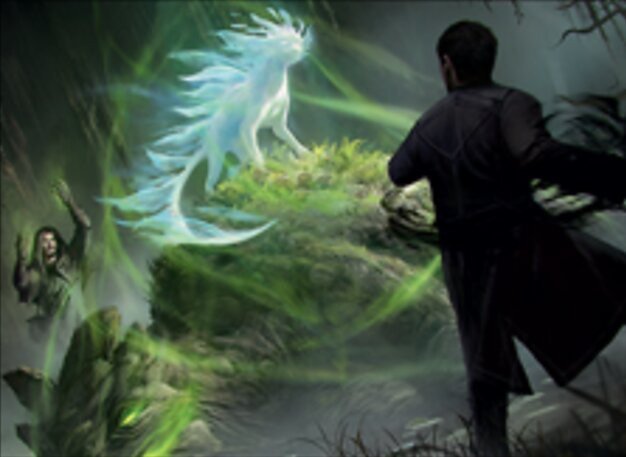