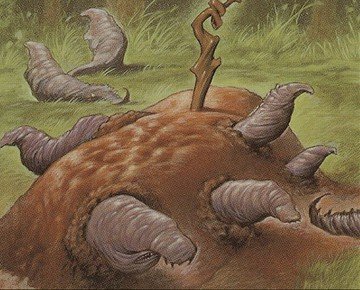 Here we will discuss about the most popular cEDH archetypes and what they have to add to us.

Hello my friends! How are you? My name is Fogaça and after a long time I'm here to talk about Commander. It's been a while, but I think you remember me and the Deck Techs series where we worked with specific commanders in order to optimize them for the Semi-Competitive Commander. Today, however, I've not come to speak about a commander in particular, but instead to begin a new journey with the high level multiplayer admirers. We will discuss the most popular archetypes of the cEDH and what they have to add to us - for that, nothing better than starting with a classic of the format:

THE COMBO Let's go from the beginning. Food Chain is our star here, allowing us to exile a creature and add a total of mana of a color to our choice equal to the CMC of the exiled target +1, but this mana can only be used to cast creatures. At first glance, this cards seems better fitted to the storm archetype. However, as we think more about it, we soon realize that the enchantment has more potential than that. 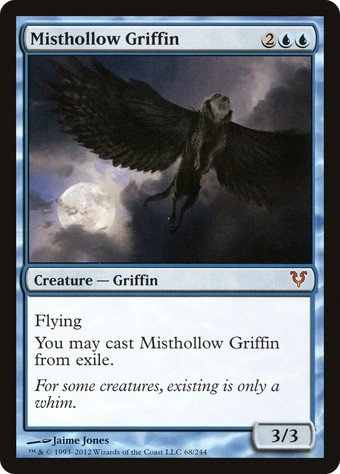 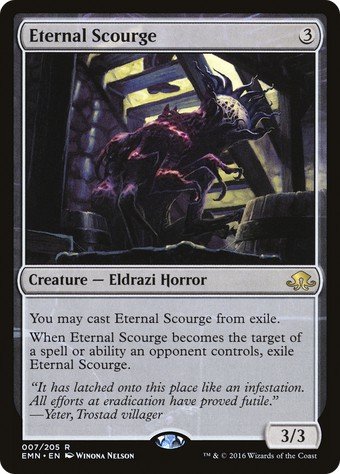 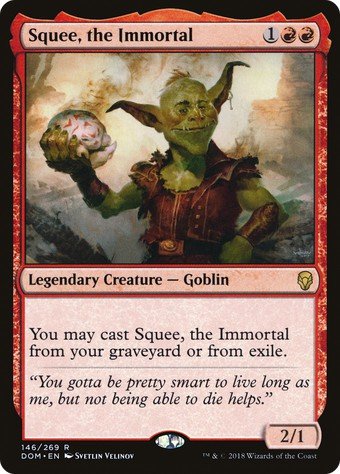 To use its full potential, Food Chain has three best friends:

- the idea here is to exile them to generate mana and take advantage of their ability to reconfigure them, thus being able to repeat the process and accumulate infinite mana in our pool (which can only be used to conjure creatures). Once we have access to a generous amount of mana, we will be able to abuse commanders who trigger abilities when they enter or leave the battlefield or when you cast then, since exiling them with

gives us the option to return then to the command zone to repeat the process.

This session will help us understand how we apply the conditions of our combo. We will explain some basic rules and detail about the role of specific commanders in this process. 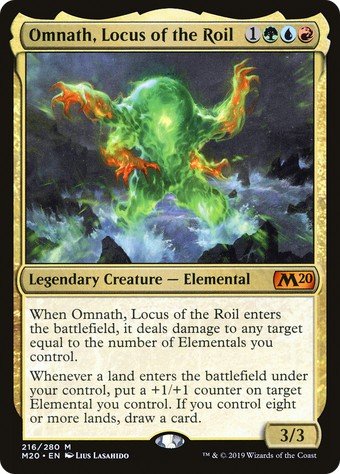 Starting from the simplest, a commander who causes damage when entering the battlefield (ETB) translates exactly what we want with a Food Chain deck. In the case of Omnath, Locus of the Roil, the build does not need to be based on elementals, and it will be enough. Every time our General comes into play, it will deal a point of damage to a specific target (assuming it is an elemental), a fact that will be repeated until exhaustion with the sequence of exiling and conjuring it again from the command zone. 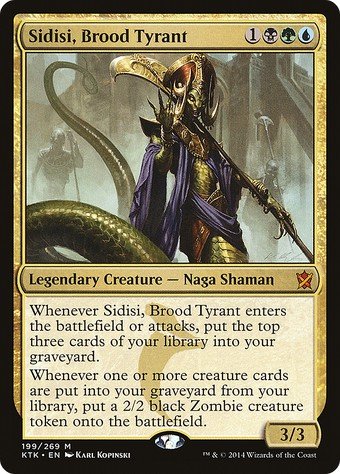 Making things a little more complex, let's take advantage of the infinite ETB's for another commander. This time,

, is present in our strategy, and even with the absence of

, she leaves nothing to be desired. Its effect gives us a Self Mill Win condition, placing our entire deck in our graveyard and creating zombie tokens as a consequence - we can use this to our advantage with a smart move. Here is the question: What many creatures in the field + Dread Return sent to the graveyard + an empty library reminds? My answer: a victory with Thassa's Oracle.

Here we have an all star of eternal formats showing up.

, is everything that the Food Chain players who would not want to spend on a mana base asked for. With only two colors, Uro comes with a unique draw effect with his ETB, and he himself is already returning to the command zone, so infinite mana is all we need to draw our entire deck and again finish the game with

. Also, drawing all the deck gives us other finishers like 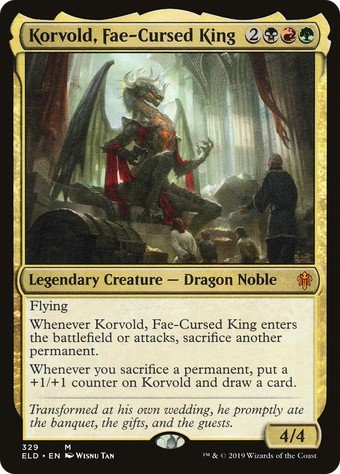 Launched in Eldraine, Korvold, Fae-Cursed King, shines a lot in Standard (unlike his collection and Food Chain partner, Chulane, Teller of Tales), but it also terrifies slow deck players all over the world. His idea is to promote the infinite ETB and use our immortal goblin as fuel to buy the entire deck again; the difference will be that we will not have access to the blue color, so our mana stands out as the finisher, allowing us to end the game with Walking Ballista or other creatures with a similar effects. 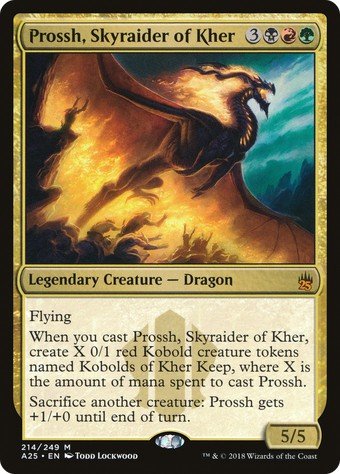 Now we come to the most unique commander of this archetype, even if it is not the main one.

, has the specificity of not needing the creatures that are conjured from exile to reach the infinite - his ability to create tokens allows us to always have enough creatures to conjure him again, which makes the finisher of the deck be an outlet for our infinite kobold generator (which can be 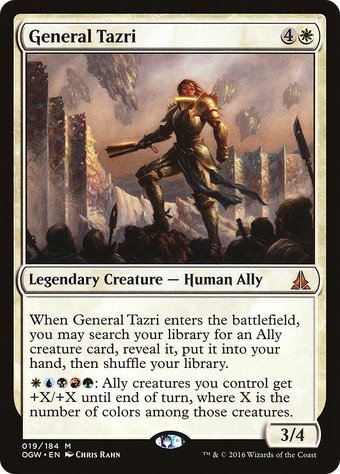 Coming to the end, we talk about General Tazri, a notable 5C commander, who, for a long time, made the tier 1 list of the format. Her idea is that she acts as a tutor, who, upon entering the battlefield, will seek out

, who will be pivots to end the game with successive entries of Tazri on the battlefield. 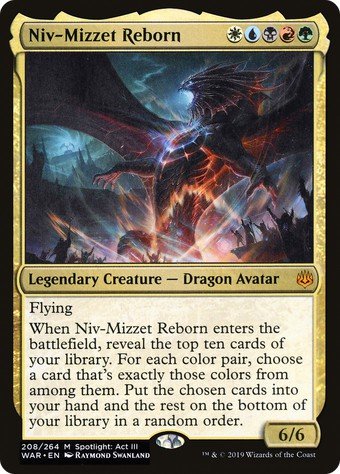 To continue and talk about our beloved

, we need to recap the period of its launch. At the time, Tazri was the chief commander of the Food Chain, but it had the weakness of being just a combo piece, while Niv could function similarly and still add value when cast in a vacuum. From this fact, a build designed for multicolored spells was created, in order to use the commander to search for valuable pieces and to end the game when we find

. However, this restricted the deckbuilding in using many two-colored spells, spending slots belonging to monocolored staples, which led us to the creation of our last build of the night. 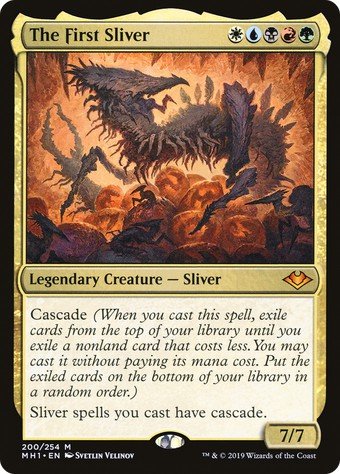 If Niv's problem was to limit the use of staples, now we can abuse them.

came to step-up the Food Chain archetype to the cEDH once and for all, adding value with explosiveness. Many people might be thinking something like "but how does a sliver tribal card does this?", And I tell you: the only sliver here is the commander himself. Since it has cascade, we can cast it infinitely, in order to pull the entire deck to play, and the best thing is that the only limitation is to use cards with CMC less than 5 - I can only think of

that exceeds this rule and generates value for the deck. All effects related to damage, draw or mill on the ETB can be used, just choose your favorite and add it to the deck, which brings us to our next topic.

In the first builds presented, we needed more cards related to the same combo for everything to work. However, the more we refine things, the more slots and options we have at our disposal. It is normal that the five-color decks have more finisher options since all cards made in the history of Magic are viable, but there are some other archetypes that corroborate with the Food Chain - the late Flash / Hulk is one of those, as well as the Consultation and

It is interesting that each archetype will always have cards that match its objectives, thus acting as a kind of support for our plans, and, therefore, this session will focus on these cards. Since we have cited their existence, we will explain more about the Demonic Consultation and its partner Tainted Pact, as well as how they act on the Food Chain decks. The duo is known as "the forbidden tutors", assuming that their cost is too high and their use is extremely "all-in", but, as we know, they not only have their own archetype (which we will talk about in the future) , but they also add in a way not seen before for our Food Chain. Think with me, we need two pieces to close our goal here, and one of them can be conjured from exile (or one of the options for this one), so there's no reason why we can't use our forbidden tutors to find Food Chain, since, if we ended up exiling one of the creatures in the process, we performed a 2 for 1 successfully. To finalize our citations, we have a pack of cards that contributes to our primordial idea by exiling exactly what we want - what would be a drawback or a way to remove opponents' pieces from the game becomes a tutor when we use cards like Bitter Ordeal, Extract, Foresight and Manipulate Fate to remove our key creatures from the game.

For this specific archetype, we have no alternative with a lower monetary value, since the Food Chain itself has a unique effect and a high cost for those who want it, however, if your will is to avoid unnecessary expenses, reducing the amount of colors in your deck can help you avoid spending on lands.

The Food Chain archetype has history. He already had few pieces in the past, but each collection brings new upgrades. More and more this archetype is becoming one of the most loved by players. His builds are extremely all-in, which justifies his speed and gives you a reason to play with him or against him, so it is interesting that we get to know the archetype and its variables better in order to have a better game reading and greater baggage as players. That's it for today. I often ask readers to leave their feedback so that we can always improve. The series aims to address only a part of a whole sphere that covers an extremely diverse format, so I invite you to subscribe to my hyperlink (YouTube channel), where I talk about Commander, not only competitive, but also in other varieties, as well as about other formats. Until next time, my friends!
Next article in this serie