This article talks about the cards I believe that will have the greatest potential on Standard.

, the card of the best player of all time, Paulo Vitor Damo da Rosa. It has a good body to attack and has evasion, which makes blocking difficult. Now the important part of the card is its ability:

When it enters the battlefield, Elite Spellbinder can exile any nonland card from the opponent and the exiled card can be conjured with the additional cost of 2. This is very relevant to break the opponent's curve or delay a lot of impactful plays like

. What makes this creature so interesting is that the card remains exiled even after Spellbinder leaves the field, which means that even if the card is destroyed or bounced back, the tax effect will remains. One last observation is that the PV card locks in cycling skills. For example, if

or other cycling cards are exiled, they can no longer be cycled, only cast. All of these qualities make Elite Spellbinder a great companion for

Reidane, God of the Worthy

The next card worth mentioning is

. Despite having sorcery speed, the card is quite versatile and can deal 3 damage to any creature or planeswalker or destroy an artifact or enchantment. The card's versatility can destroy any creature, planeswalker, artifact or enchantment for two mana is enough to play on decks like Boros aggro and Naya Adventures. The drawback of being a sorcery doesn't seem so problematic because of the possibility of having multipletarget options for the card. Today, the Boros combination has no cards that have a similar effect, and even Naya needs a combination of cards to achieve the same effects, such as

. Another card that should see a lot of play is

. You don't have to be an expert to see how strong that card is, as we are in a format in which almost all relevant permanents are mono-colored. An exception is

, which looks like a pretty bad target for removal, as the first chapter is the most important and it doesn't kill

either. For two mana you can exile any monocolored permanent, dealing with almost any threat at instant speed. This removal will fit very well in an Esper or 4c Doom deck. The next card has a lot of potential to be one of the best, if not the best, cantrips of the format.

is the typical spell that easily generates card advantage and increases the consistency of the deck and should make the Izzet Spells decks resurface once again. Despite being sorcery, it looks like a good card at any moment of a match. Drawing a card, putting another at the bottom of the deck and exiling another that can be played until the end of the turn is an extraordinary combination that can filter the deck very well. Casting this spell on 2, we can draw a good card for the early game, exile something useless or of low impact and throw to the bottom a card we want to cast later in the game (for that, obviously we need cards that shuffle the deck, such as

). I see Temur Adventures and Izzet using the card a lot. The last card that caught my attention is

. This is a slightly riskier bet than the others because the drawback is relevant. Casting the card for 2 or 4 mana can make a lot of difference, but while giving your opponent a draw is bad, losing the game on the spot is even worse. We have other 4 mana removals that exile creatures or planeswalkers like

. However, the advantage of being able to exile for two mana cards like

among other creatures with death triggers effects, indestructible or with escape is quite relevant. I can see lists of Sultai using the removal in place of some

. "Cheating" in mana and being able to cast 4 mana spell for two mana is always good and fits very well in the strategy of mid / control decks that aim to brake decks with strong early game. It's the kind of removal we don't want against other mid / control decks, but against aggressive archetypes and some adventure decks with low-cost and impactful drops, the new removal is good enough to test. Some other cards caught my attention, but they seem to require a lot of effort to work in Standard, they have problems against staple cards in the format, there are better alternatives at the moment or they just don't have a very high power level at first:
Honorable Mentions
I will comment briefly on these letters.

have the same problem: black decks are using

, this is enough to make these unplayable or simply very fragile cards. Apart from the new removals that will come with Strixhaven.

are interesting in an Izzet Tempo deck, but the archetype itself has a fragile strategy that doesn't last long in the format. If we have a strong Izzet deck, I believe that these two cards will constitute the decks, as they combine very well with

fall into the category of not having enough power level and / or having better substitutes. Fracture is good, but it doesn't destroy creatures. Mortality Spear is only weaker than other options in the format and Reconstruct History has potential, but it requires a lot of effort to work. Harness Infinity is apparently good, but extremely heavy to play with. Thinking of real decks that can use some copy of the card, Sultai doesn't seem like the ideal shell, despite being extremely powerful in the late game. Abzan has

that is only better in the archetype, although the two spells do not fulfill exactly the same purpose. Of the four, the last card seems to me the most interesting because it can give a gas in the late game for a Boros aggro or Naya, since we have few cards that exile and sees play. The problem is that it might be too slow, but when it comes to late-game spells, it might be worth testing. As for

, I think it is weak, but it is a 3-mana Simic planeswalker, which always draws attention. It takes 4 turns to use its last ability, enough time to be removed from the board or at least take some damage.. The Simic combination comes with several cards that create tokens with + X / + X counters, but, as previously highlighted, the strategy is fragile against removals, effects that exile and bounce spells. The last two cards,

have the potential to be played a lot. The Simic command is very interesting because we can choose two abilities from the card, theoretically solving two problems at once for three mana. I see several scenarios in which we counter

to the opponent's hand. In the late game, shuffling the

that has been discarded or countered and other pieces of the Ultimatum pile is another great option. The important thing about

is the back side, Revel in Silence. For WW to prevent your opponent from casting spells in a turn is the type of ability that might win some matches on the spot. I consider it a good side card for Mono White, Boros and Naya against Sultai, although Mono White can only cast the back side, but the creature seems irrelevant compared to the back side. Above Reidane,

, Strixhaven's Silence is the most effective against the Sultai Ultimatum by simply not allowing any spell to be cast. Reidane and Deafening Silence allow you to cast creatures with the Ultimatum normally and the Vortex deals damage, but does not prevent the Ultimatum from being cast. Revel in Silence in response to the Ultimatum might be really backbreaking. I hope you enjoyed the analysis and the highlights I made here. Thanks for reading! 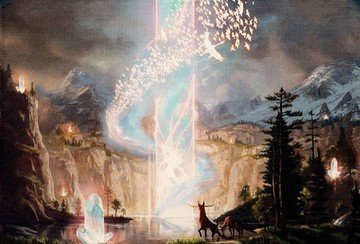