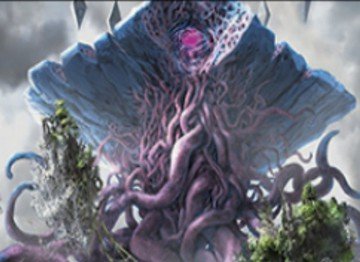 This time we'll cease our hunger for knowledge upon the feast that is Eldrazi lore!

Hey, guys! o/ This is Ari and today I will continue this series about creature types featured in Magic.In the first article I told how vampires, a race well known in our pop culture, originated in the plans of Innistrad, Zendikar and Ixalan. This time I will address the

, creatures that exist only in the worlds of our favorite card game. Eldrazi are giant and powerful monsters that live to devour energy wherever they go. Talking about their origin turned out to be a little more complicated than I thought, because the information about the emergence of the Eldrazi is simply unknown. What we do know is that they originally do not belong to any specific world, they are native to the

, which is actually the name given to the space between the planes of the Multiverse.

As I said, the Eldrazi are a race that exist only in Magic, a fact that has always made me question what was their creative process. Something very curious that I didn't know until recently is that the Eldrazi were inspired by Cthulhu and Galactus. For those who don't know what I'm talking about, a quick Google search gives a brief description of these characters: •

is a cosmic entity created by the horror writer H. P. Lovecraft in 1926. Cthulhu is a gigantic-sized ancestral creature often used in science fiction and fantasy circles as a synonym for horror, magic, or extreme evil. •

, also known as The Devourer of Worlds, is a comic book character, a cosmic entity within the Marvel universe. 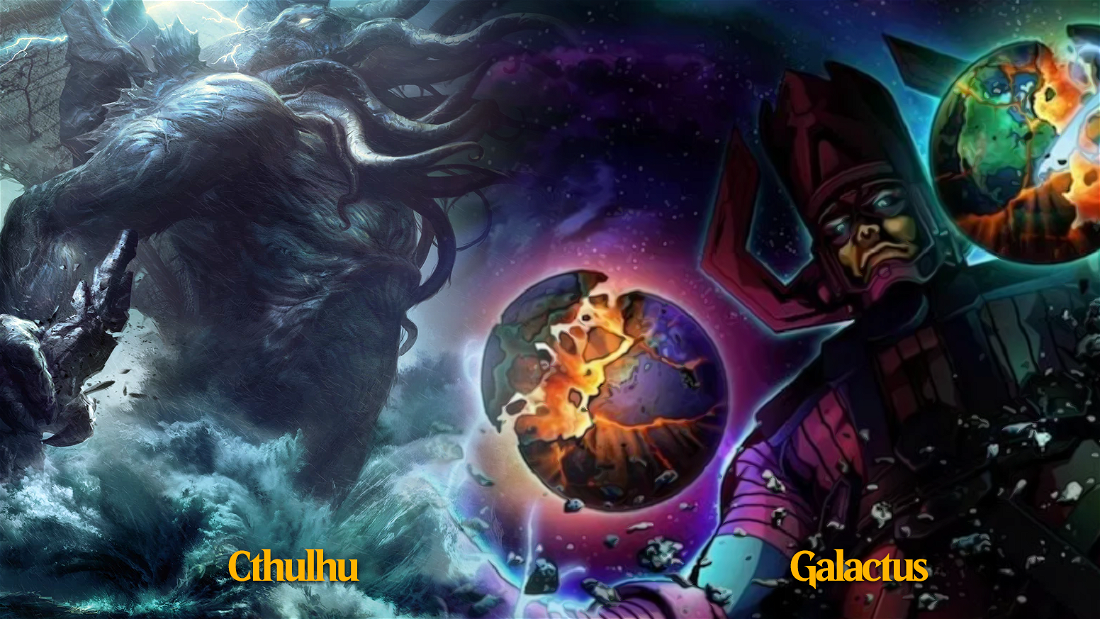 We can really find several traits of these two characters in the Eldrazi, right? The first Eldrazi-type creatures were introduced to Magic in April 2010 in the

card, released in the previous collection (Worldwake), already mentioned the Eldrazi, leaving players curious and even confused, as Wizards had not yet given any details about this new type that was about to emerge.

After all the mystery, the players finally met the mighty Eldrazi titans: 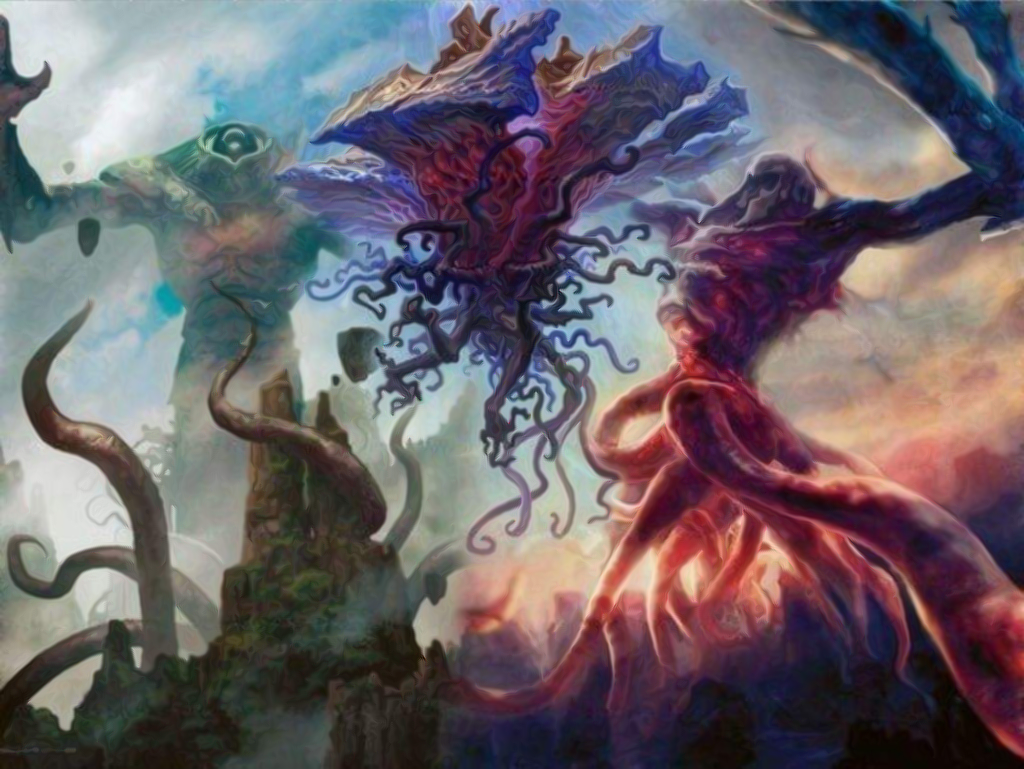 An interesting fact about the titans is that they each have their own lineage of subordinates who form true armies. Each lineage reflects the image of its parent, that is, we can visually identify the origin of an Eldrazi offspring.

My goal here is not to tell you about the entire Eldrazi lore, because it has so many details that it could easily be published in a book :P . For this first article I would like to briefly tell you about the Eldrazi's passage through

) became aware of their existence and decided to destroy them. However, the Planeswalkers' plan failed and they were unable to destroy the elder Eldrazi. So they decided to imprison them in Zendikar to avoid the damage they could do to the Multiverse. Sorin lured the titans to Zendikar, Ugin used his knowledge of colorless magic to create a containment energy field and Nahiri built a complex network of mountains and stones (called hedrons) that would act in sync with the energy field created by Ugin to confine the Eldrazi. After imprisoning the Eldrazi, Sorin and Ugin left Zendikar and Nahiri became the guardian of that plane. 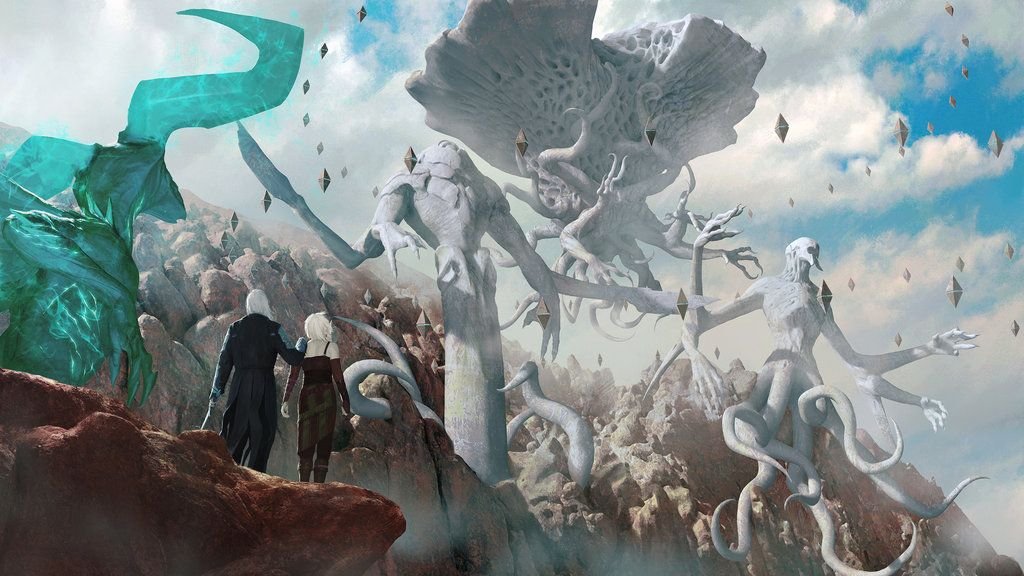 Hundreds of years passed while the existence of the Eldrazi remained unknown to the rest of Zendikar, but even though imprisoned, the titans wielded some kind of power over the plane. Such power was so great that some of the inhabitants of Zendikar worshiped the titans as gods. The merfolk, for example, believed in three deities they called

, but they did not know that they were actually worshiping the world-destroying beings who were trapped in the plane. It is important to mention that at a certain point in this timeline, Nahiri realized the great danger the Eldrazi still posed and left the plane seeking for Sorin's help, and since then we have had no further news from the stoneforger.

The "magic" used by Sorin, Ugin and Nahiri to imprison the Eldrazi could only be "broken" by 3 Planeswalkers. Knowing this and interested in the power of the Eldrazi, the planeswalker dragon

devised a plan for

to go to Zendikar and begin the Eldrazi's liberation without even knowing what they were really doing. 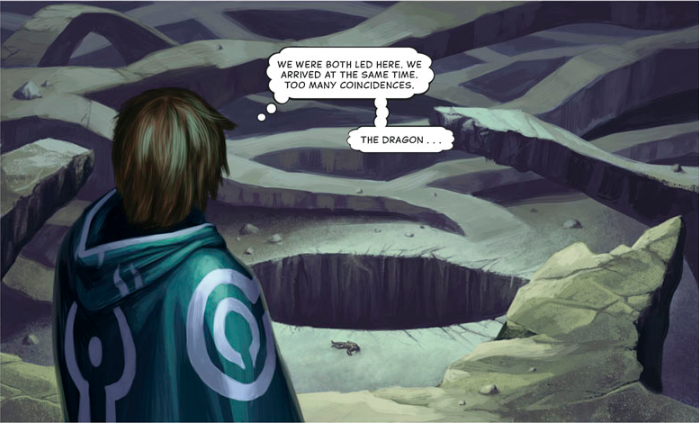 The lore for the original Zendikar block ends about at this point, full of suspense and many unanswered questions. Players would have to wait another five long years to know what happened after the Eldrazi titans were released.

In 2015, we return to Zendikar to finally witness the great battle between the Eldrazi and the

(as the inhabitants of Zendikar are called). Let me start telling you about

, who arrives at Zendikar in order to prevent Ulamog from further destroying this plane. The story has several battles and twists, and the participation of several Planeswalkers. 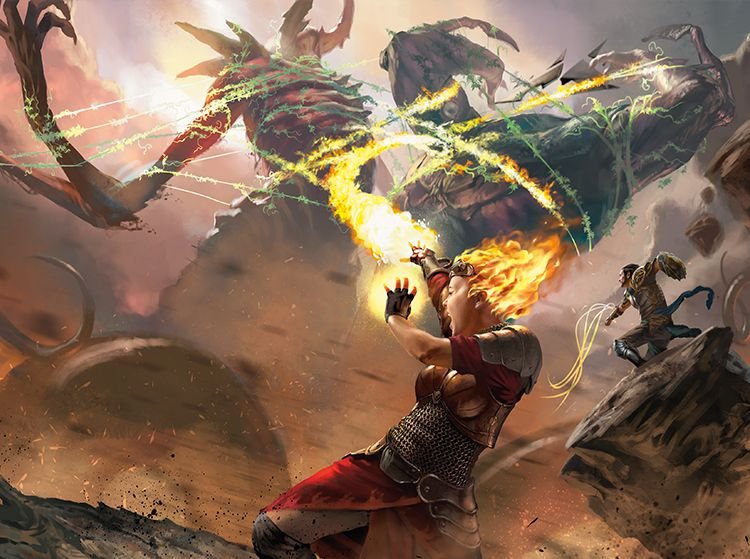 Ob Nixilis, for example, is responsible for awakening Kozilek, allowing the second titan to join Ulamog to devour the plane of Zendikar. Gideon teamed up with

(another Planeswalker), Chandra and Jace and, after defeating Ob Nixilis, they face Ulamog and Kozilek in an epic battle that ended in a massive explosion, finally destroying the gigantic cosmic entities.

Oath of the Gatewatch

Exhausted, the four Planeswalkers (now forming a team known as the

) stood on top of a rock and looked down at the land they had saved. 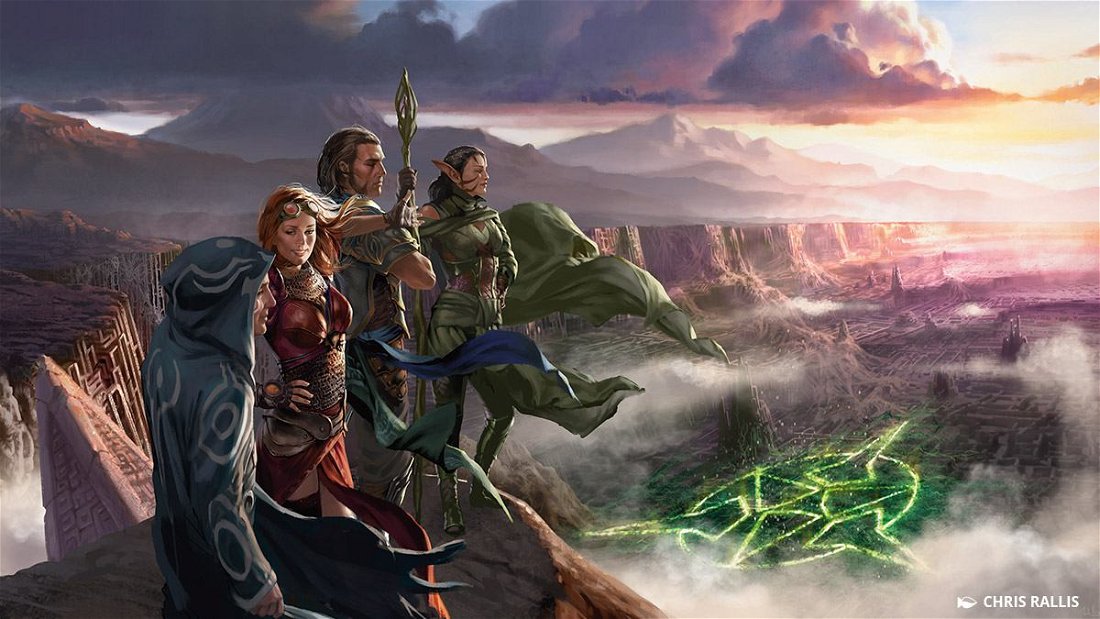 And as everything that involves Eldrazi comes with a hint of mystery, the lore of this block also ends with an unanswered question: Where was the third Eldrazi titan? Was Emrakul on another plane? Although the Battle for Zendikar was won, the "Gatewatchers" knew the war was far from over. They needed to find the third titan and prevent other worlds from being devastated... Emrakul's fate was later revealed in the

block, but to prevent this article from getting tiresome, I will tell this story another time, okay? I hope you enjoyed this article!! Let's talk more about the misterious Eldrazi in the comments? Thank you very much for reading and until the next time!