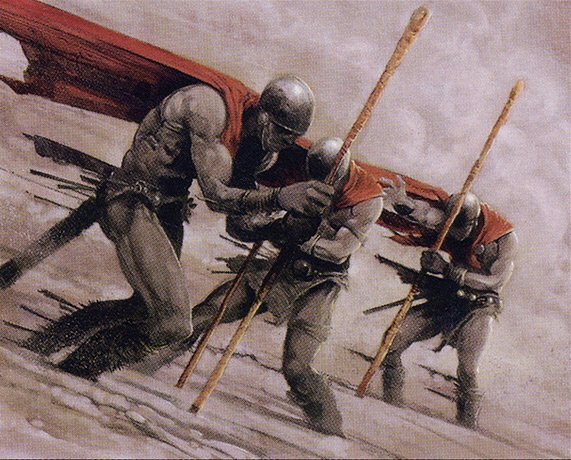 We will look at one of the main combos of the format: The Tireless Tribe Combo.

Hey guys! This is Ari and in today's article we will look at one of the main combos of the format: The Tireless Tribe Combo. I confess I am part of the portion that believed that the Tribe would die after Gush's ban, and look that my opinion was based on the hypothesis of banning only

, now imagine this ban accompanied by

?Luckily I was very wrong and yes, there is life after ban. Those who have been following Pauper more closely in recent months have been able to observe the changes the deck has undergone until it reaches current versions. Right after the ban, the first move was the addition of the cards

In late May, the mol player Entropy263 won 5-0 with the following list:

The second major move came after the release of Modern Horizons, it was when winter came to Pauper bringing so many modifications to the Tribe that it practically became another deck, ceased to be Full Combo and became a Midrange + Combo. The Astro Kit was added to the deck and the blue gave way to green, the deck even came to be known as "Tribe Bangs with the Ass" for use

, one of the main deck cards. In July, player FARADAN took 7th place in a Pauper Challenge with the list below:

The most recent move was the emergence of the most consistent post-ban version of the deck to date. The addition of Whiteout made Tribe resurface in Pauper's competitive scene. The deck has done several results from MOL leagues and Challenges.

has always been important in the combo by performing two functions: 1st Dig the deck; 2nd Hand-up cards that would be discarded to activate Tireless Tribe's ability multiple times.

doesn't dig the deck, but can be even more efficient than Gush to activate Tireless Tribe, because in addition to handling the voids better, all of your land in play can be used to return the Whiteout to hand several times to discard it again. Often the pre-ban Tribe struggled to win games where opponents gained hit points. The current Tribe can better handle these situations, I've heard reports of matches that were won even after the opponent made a

for many hit points. Recently the player PauloCabral_BR won two Top 8's in the Challenges: 4th place on August 25th and 7th place on September 1st.

Once again we have the example of a card that was always present in Pauper, but had not yet been explored by its players. Similar cases have happened to

himself in the past. We live a moment of extreme popularity of Jeskai. Is the answer to the deck not asleep at this point? Well, that's a matter for another time. For today's article I invited Paulo Cabral for an interview, no one better than him to talk property about the deck. First of all I would like to thank Paulo for accepting to answer our questions and sharing his view of the deck with the community. I hope readers like this idea.

Many people believed that Tribe would lose its relevance in format after the ban of Gush, Gitaxian and Daze. How was your relationship with the deck from the time of the ban to the current list?

A: I never had a close relationship with Tribe before the ban, I played with the deck, but he didn't have a good match against Mono U and for that reason I preferred to play with other decks at that time. Right after the ban I even tested a version of the deck that used Squadron Hawk to fill the hand, but this interaction was not enough to make the deck run, I only started playing the deck often after Whiteout's "discovery".

What do you think are the main differences between the pre-ban version, which was once one of Pauper's main decks in the past, and the current version with Whiteout?

A: The differences are mainly in the features that the deck has lost due to the absence of banned cards.The Gitaxian Probe made it possible to know your opponent's hand and combine more safely, today we play "in the dark". Daze allowed to surprise the opponent and Gush dug many more cards from the deck, often in extreme situations where I would lose the game on the back of not having Inside Out on hand, I would go on the attack still hoping to find the card with Gush during combat, sometimes that worked.

I like the current version because although it is slower, it plays relatively better against the Aggros. The combination of Seeker of the Way and Prismatic Strands has improved the deck in this regard.

You have been getting good results with the MTGO deck in both leagues and Challenges. Do you think the deck is well positioned? What have been your biggest difficulties in the current meta?

A: Yes, I consider the deck well positioned today. He has a very good match against Tron (I consider 70% Tribe) and against the format aggros. The difficulties are Jeskai (60% Jeskai) and Mono W Heroic, who I consider the worst match for Tribe.

Have you ever played Treefolk Tribe, also known as “Tribe Bangs with the Ass”?  What did you think of the list?

A: No, I didn't play with the deck, but I would certainly miss the cantrips. Just looking at the list, I imagine she doesn't have a good match against Tron and Jeskai, which is a problem because these two decks represent much of the goal. Let's make a quick game?

I'm gonna name a few letters and you say how important they are on your list?

Best creature against aggros. Good against Stompy, Goblins and Burn. Against Heroic I take off Seeker because he is not very relevant. One of the best deck tutors. As well as allowing you to fetch an Inside Out or a Seeker of the Way according to game situation, it is also a great void. I often use a lot against Éditos, Pestilência, removals in general. I like the card's versatility, it can handle parts of the combo like Inside Out or a protection like Circular Logic, but she can also get Dizzy Spell and this is very important to find Tireless Tribe himself. There have been situations to make a Muddle The Mixture for Merchant Scroll for Dizzy Spell for Tireless Tribe. (You have been able to use in your first lists) I used to improve a little match against Jeskai, it's a good strategy against the deck, but I currently do not have slot in the side. Maybe I'll do it in the future.