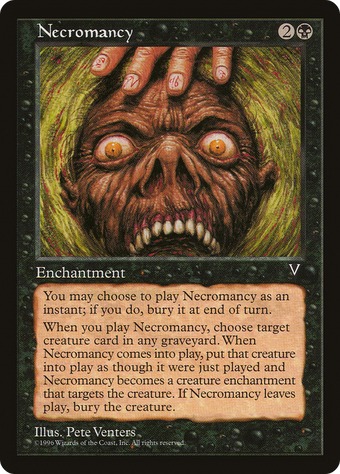 Legacy
Vintage
Commander
Duel
Premodern
Art minified Art full
Full image
The sacrifice occurs only if you cast it using its own ability. If you cast it using some other effect (for instance, if it gained flash from Vedalken Orrery), then it won’t be sacrificed.
Necromancy enters the battlefield as an enchantment and then becomes an Enchant Creature Aura as a triggered ability upon entering the battlefield. It follows all the rules for Auras from then on.
The bringing of the creature onto the battlefield and then putting Necromancy on it is all done as part of the resolution.