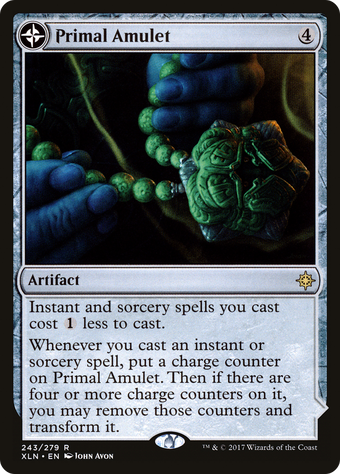 Art minified Art full
Full image Back full image Back art Price history
For more information on double-faced cards, see the Ixalan mechanics article (http://magic.wizards.com/en/articles/archive/feature/ixalan-mechanics).
To determine the total cost of a spell, start with the mana cost or alternative cost you’re paying, add any cost increases, then apply any cost reductions. The converted mana cost of the spell remains unchanged, no matter what the total cost to cast it was.
The mana produced by Primal Wellspring can be spent on anything, not just an instant or sorcery spell.
The delayed triggered ability from Primal Wellspring’s mana ability will trigger even if Primal Wellspring leaves the battlefield before that mana is spent.
The copy will have the same targets as the spell it’s copying unless you choose new ones. You may change any number of the targets, including all of them or none of them. If, for one of the targets, you can’t choose a new legal target, then it remains unchanged (even if the current target is illegal).
Primal Wellspring’s delayed triggered ability can copy the spell even if that spell is countered before the ability resolves.
Primal Amulet’s last ability triggers once you’ve completed casting a spell. Notably, you can’t use Primal Wellspring to pay for the spell that gives Primal Amulet its fourth counter.
If the copied spell has an X whose value was determined as it was cast, the copy has the same value of X.