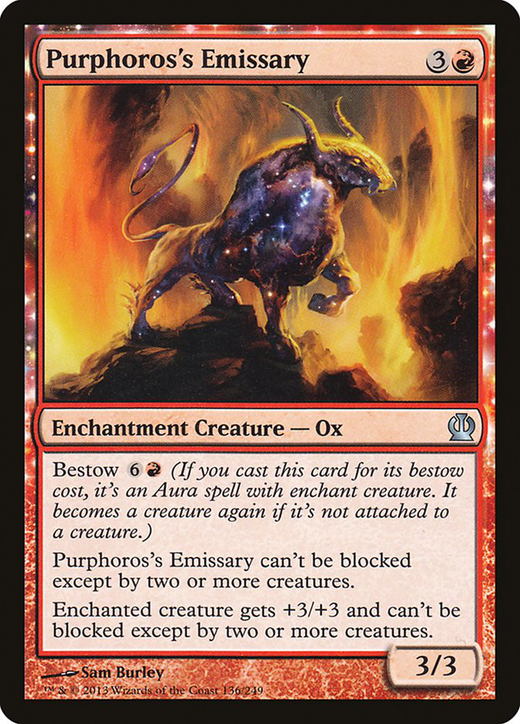 Bestow {6}{R} (If you cast this card for its bestow cost, it's an Aura spell with enchant creature. It becomes a creature again if it's not attached to a creature.) Menace (This creature can't be blocked except by two or more creatures.) Enchanted creature gets +3/+3 and has menace.

Art minified Art full
Full image Price history
Unlike other Auras, an Aura with bestow isn’t put into its owner’s graveyard if it becomes unattached. Rather, the effect making it an Aura ends, it loses enchant creature, and it remains on the battlefield as an enchantment creature. It can attack (and its abilities can be activated, if it has any) on the turn it becomes unattached if it’s been under your control continuously, even as an Aura, since your most recent turn began.
On the stack, a spell with bestow is either a creature spell or an Aura spell. It’s never both, although it’s an enchantment spell in either case.
Auras attached to a creature don’t become tapped when the creature becomes tapped. Except in some rare cases, an Aura with bestow remains untapped when it becomes unattached and becomes a creature.