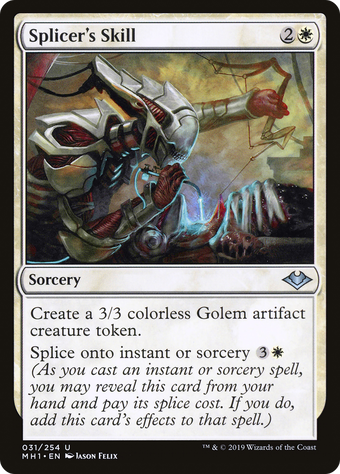 Create a 3/3 colorless Golem artifact creature token. Splice onto instant or sorcery {3}{W} (As you cast an instant or sorcery spell, you may reveal this card from your hand and pay its splice cost. If you do, add this card's effects to that spell.)

Modern
Legacy
Vintage
Penny
Commander
Duel
Art minified Art full
Full image
The abilities spliced onto the spell happen last, after all of that spell’s other effects. Notably, the Golem won’t be on the battlefield yet if the spell has an effect that affects all creatures, all creatures you control, or similar.
If all of the spell’s targets are illegal when the spell tries to resolve, it won’t resolve and none of its effects will happen, including those from cards spliced onto it.
If a spell is copied, choices made while casting it are copied, so the copy will have the same abilities spliced onto it as the original.