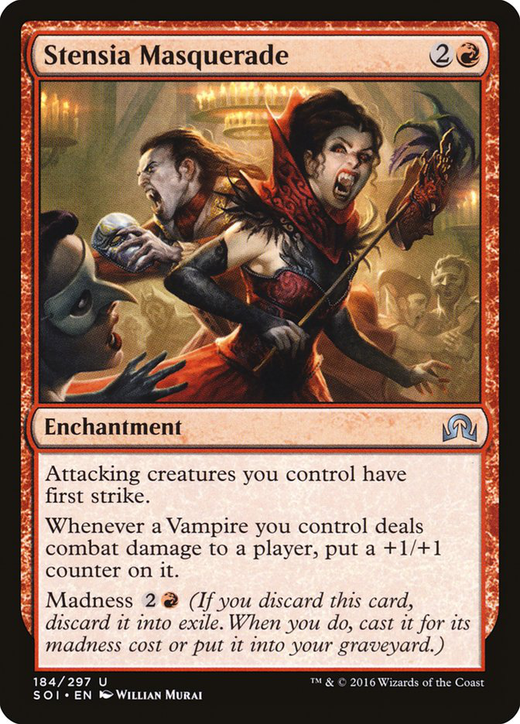 Attacking creatures you control have first strike. Whenever a Vampire you control deals combat damage to a player, put a +1/+1 counter on it. Madness {2}{R} (If you discard this card, discard it into exile. When you do, cast it for its madness cost or put it into your graveyard.)

Art minified Art full
Full image Price history
When you cast a card with madness, it was still discarded. If it was discarded to pay a cost, that cost is still paid. Abilities that trigger when a card is discarded will still trigger.
Losing or gaining first strike after first-strike damage has been dealt won’t cause a creature to deal combat damage twice or to not deal combat damage.
If you discard a card with madness to pay the cost of a spell or activated ability, that card’s madness trigger (and the spell that card becomes, if you choose to cast it) will resolve before the spell or ability the discard paid for.
Effects that cause you to pay more or less for a spell will cause you to pay that much more or less for its madness cost, too.
A spell cast for its madness cost is put onto the stack like any other spell. It can be countered, copied, and so on. As it resolves, it’s put onto the battlefield if it’s a permanent card or into its owner’s graveyard if it’s an instant or sorcery card.