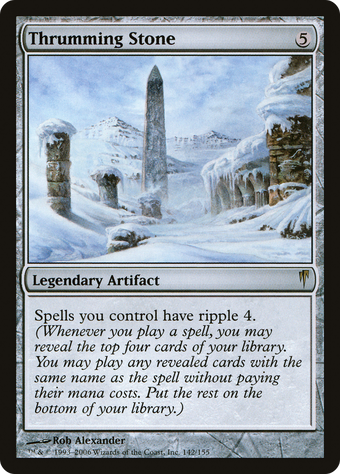 Spells you cast have ripple 4. (Whenever you cast a spell, you may reveal the top four cards of your library. You may cast spells with the same name as that spell from among the revealed cards without paying their mana costs. Put the rest on the bottom of your library.)

Modern
Legacy
Vintage
Penny
Commander
Duel
Art minified Art full
Full image
If you cast a spell that already has ripple (such as Surging Flame, which has ripple 4) while Thrumming Stone is on the battlefield, both ripple abilities will trigger separately. Assuming you choose to do all “you may” actions, when the first instance of ripple resolves, you reveal the top four cards of your library, cast all Surging Flames, and put the rest of the cards on the bottom of your library. Any new Surging Flames are on the stack on top of the other instance of ripple, so they’ll resolve next. Each of them also has two instances of ripple, which trigger separately, and the process continues until the ripple abilities don’t reveal any Surging Flames.