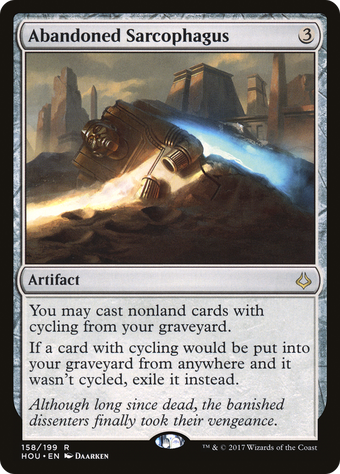 Historic
Gladiator
Pioneer
Modern
Legacy
Vintage
Penny
Commander
Duel
Art minified Art full
Full image
Abandoned Sarcophagus doesn’t grant you permission to do anything with those cards except cast them. For example, you can’t cycle nonland cards with cycling from your graveyard.
A token permanent with cycling will go to your graveyard before ceasing to exist. It won’t be exiled. Similarly, a nontoken permanent that lost cycling while it was on the battlefield will also go to your graveyard.