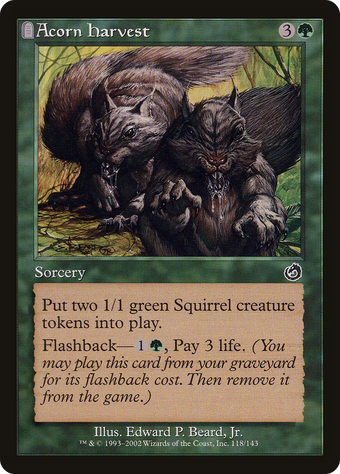 Create two 1/1 green Squirrel creature tokens. Flashback—{1}{G}, Pay 3 life. (You may cast this card from your graveyard for its flashback cost. Then exile it.)

Legacy
Pauper
Vintage
Commander
Duel
Premodern
Art minified Art full
Full image
“Flashback [cost]” means “You may cast this card from your graveyard by paying [cost] rather than paying its mana cost” and “If the flashback cost was paid, exile this card instead of putting it anywhere else any time it would leave the stack.”
You can cast a spell using flashback even if it was somehow put into your graveyard without having been cast.
To determine the total cost of a spell, start with the mana cost or alternative cost (such as a flashback cost) you’re paying, add any cost increases, then apply any cost reductions. The converted mana cost of the spell is determined only by its mana cost, no matter what the total cost to cast the spell was.