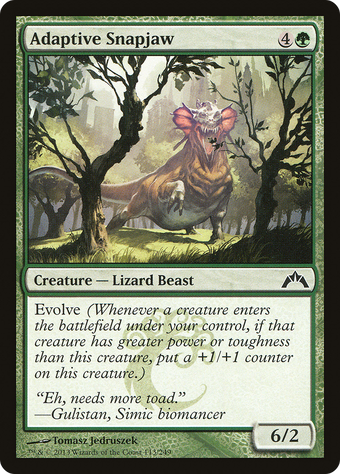 Evolve (Whenever a creature enters the battlefield under your control, if that creature has greater power or toughness than this creature, put a +1/+1 counter on this creature.)

Pioneer
Modern
Legacy
Pauper
Vintage
Penny
Commander
Duel
Art minified Art full
Full image
When comparing the stats of the two creatures for evolve, you always compare power to power and toughness to toughness.
If multiple creatures enter the battlefield at the same time, evolve may trigger multiple times, although the stat comparison will take place each time one of those abilities tries to resolve. For example, if you control a 2/2 creature with evolve and two 3/3 creatures enter the battlefield, evolve will trigger twice. The first ability will resolve and put a +1/+1 counter on the creature with evolve. When the second ability tries to resolve, neither the power nor the toughness of the new creature is greater than that of the creature with evolve, so that ability does nothing.
If evolve triggers, the stat comparison will happen again when the ability tries to resolve. If neither stat of the new creature is greater, the ability will do nothing. If the creature that entered the battlefield leaves the battlefield before evolve tries to resolve, use its last known power and toughness to compare the stats.