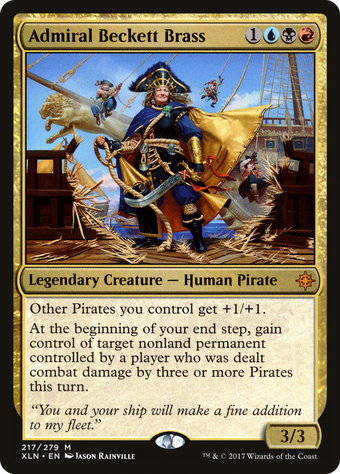 Other Pirates you control get +1/+1. At the beginning of your end step, gain control of target nonland permanent controlled by a player who was dealt combat damage by three or more Pirates this turn.

Historic
Gladiator
Pioneer
Modern
Legacy
Vintage
Penny
Commander
Duel
Art minified Art full
Full image
In a multiplayer game, if a player leaves the game, all cards that player owns leave as well, and any effects that give the player control of permanents immediately end.
If more than one player was dealt combat damage by three Pirates, you target only one permanent. It may be controlled by either of those players.
Admiral Beckett Brass’s triggered ability checks what happened earlier in the turn. It doesn’t care whether Admiral Beckett Brass was on the battlefield when those Pirates dealt combat damage, whether those creatures are still on the battlefield, or whether they’re still Pirates.