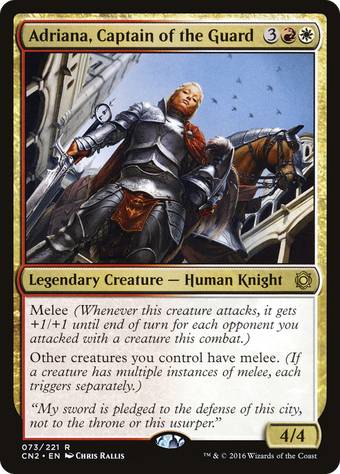 Adriana, Captain of the Guard

Melee (Whenever this creature attacks, it gets +1/+1 until end of turn for each opponent you attacked this combat.) Other creatures you control have melee. (If a creature has multiple instances of melee, each triggers separately.)

Legacy
Vintage
Commander
Duel
Art minified Art full
Full image
You determine the size of the bonus as the melee ability resolves. Count each opponent that you attacked with one or more creatures. It doesn’t matter if the attacking creatures are still attacking or even if they are still on the battlefield. It also doesn’t matter if the opponent you attacked is still in the game.
Melee will trigger if the creature with melee attacks a planeswalker. However, the effect counts only opponents (and not planeswalkers) that you attacked with a creature when determining the bonus.