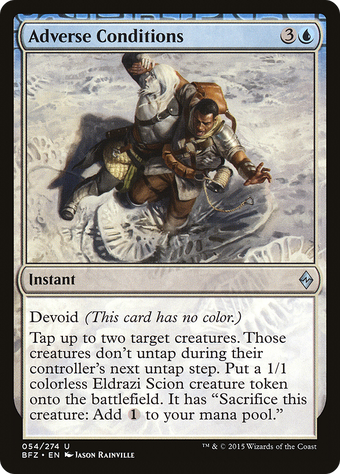 Devoid (This card has no color.) Tap up to two target creatures. Those creatures don't untap during their controller's next untap step. Create a 1/1 colorless Eldrazi Scion creature token. It has "Sacrifice this creature: Add {C}."

Pioneer
Modern
Legacy
Vintage
Commander
Duel
Art minified Art full
Full image
You can cast Adverse Conditions with no targets. When it resolves, you’ll get an Eldrazi Scion. However, if you cast Adverse Conditions with any targets and all of those targets are illegal as it tries to resolve, it won’t resolve and none of its effects will happen. You won’t get the Eldrazi Scion in that case.
Some instants and sorceries that create Eldrazi Scions require targets. If all targets for such a spell have become illegal by the time that spell tries to resolve, the spell won’t resolve and none of its effects will happen. You won’t get any Eldrazi Scions.
Other cards and abilities can give a card with devoid color. If that happens, it’s just the new color, not that color and colorless.
If a card loses devoid, it will still be colorless. This is because effects that change an object’s color (like the one created by devoid) are considered before the object loses devoid.
Eldrazi and Scion are each separate creature types. Anything that affects Eldrazi will affect these tokens, for example.
Cards with devoid use frames that are variations of the transparent frame traditionally used for Eldrazi. The top part of the card features some color over a background based on the texture of the hedrons that once imprisoned the Eldrazi. This coloration is intended to aid deckbuilding and game play.