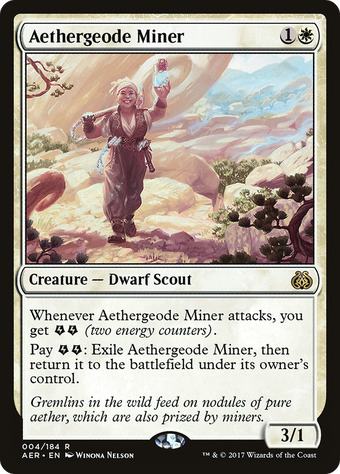 Art minified Art full
Full image
You can’t pay more energy counters than you have.
If an effect says you get one or more , you get that many energy counters. To pay one or more , you lose that many energy counters. Any effects that interact with counters a player gets, has, or loses can interact with energy counters.
Energy counters are a kind of counter that a player may have. They’re not associated with specific permanents. (Other kinds of counters that players may have include poison and experience.)
After Aethergeode Miner returns to the battlefield, it will be a new object with no connection to the creature that was exiled. It won’t be in combat or have any additional abilities it may have had when it was exiled. Any +1/+1 counters on it or Auras attached to it are removed, and any Equipment will no longer be attached.