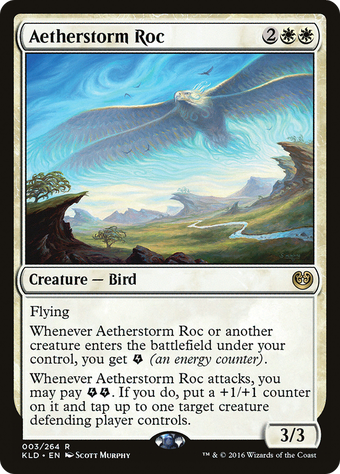 Art minified Art full
Full image
You can’t pay more energy counters than you have.
If an effect says you get one or more , you get that many energy counters. To pay one or more , you lose that many energy counters. Any effects that interact with counters a player gets, has, or loses can interact with energy counters.
If a triggered ability with one or more targets states that you “may pay” some amount of , and each permanent that it targets has become an illegal target, the ability doesn’t resolve. You can’t pay even if you want to.
Energy counters are a kind of counter that a player may have. They’re not associated with specific permanents. (Other kinds of counters that players may have include poison and experience.)
You don’t have to target a creature with Aetherstorm Roc’s last ability. If you do choose a target, and that target becomes illegal, the ability doesn’t resolve and you won’t be able to pay to put a counter on Aetherstorm Roc.
A creature entering the battlefield at the same time as Aetherstorm Roc causes its first triggered ability to trigger.