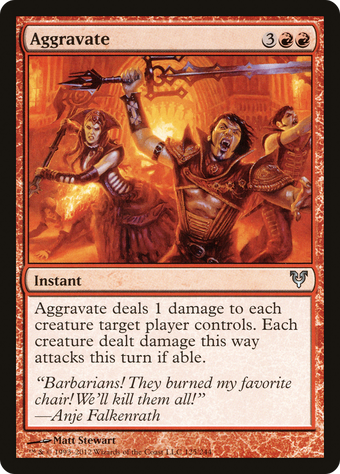 Aggravate deals 1 damage to each creature target player controls. Each creature dealt damage this way attacks this turn if able.

Modern
Legacy
Vintage
Penny
Commander
Duel
Art minified Art full
Full image
If, during a player’s declare attackers step, a creature is tapped, is affected by a spell or ability that says it can’t attack, or hasn’t been under that player’s control continuously since the turn began (and doesn’t have haste), then it doesn’t attack. If there’s a cost associated with having a creature attack, the player isn’t forced to pay that cost, so it doesn’t have to attack in that case either.
Aggravate targets only the player. Creatures with hexproof that player controls will be dealt damage by Aggravate if it resolves.