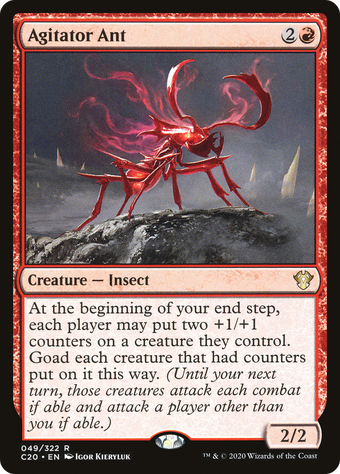 At the beginning of your end step, each player may put two +1/+1 counters on a creature they control. Goad each creature that had counters put on it this way. (Until your next turn, those creatures attack each combat if able and attack a player other than you if able.)

Art minified Art full
Full image Price history
If you goad a creature you control, it must attack and it must attack a player rather than a planeswalker.
If a goaded creature can’t attack for any reason (such as being tapped or having come under that player’s control that turn), then it doesn’t attack. If there’s a cost associated with having it attack, its controller isn’t forced to pay that cost, so it doesn’t have to attack in that case either.
Attacking with a goaded creature doesn’t cause it to stop being goaded.
As Agitator Ant’s ability resolves, first you choose which creature you control, if any, to put two +1/+1 counters on, then each other player in turn order does the same, knowing the choices made before them. Then each chosen creature receives its +1/+1 counters and becomes goaded.