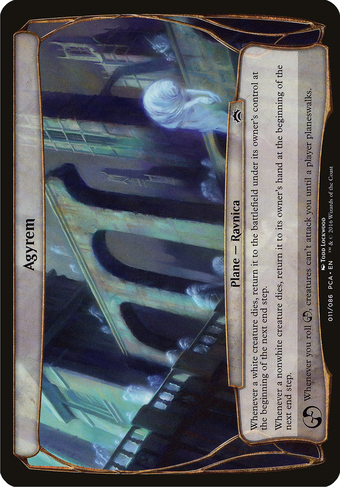 Art minified Art full
Full image Price history
The controller of a face-up plane card is the player designated as the “planar controller.” Normally, the planar controller is whoever the active player is. However, if the current planar controller would leave the game, instead the next player in turn order that wouldn’t leave the game becomes the planar controller, then the old planar controller leaves the game. The new planar controller retains that designation until they leave the game or a different player becomes the active player, whichever comes first.
If you’re affected by the chaos ability, creatures will still be able to attack planeswalkers you control.
If a token creature is put into a graveyard from the battlefield, one of Agyrem’s first two abilities will trigger, but the token will cease to exist long before it would be returned somewhere.
If a creature is put into a graveyard from the battlefield, its last existence on the battlefield is checked to determine its color.
Agyrem’s first and second abilities each set up a delayed triggered ability. These abilities will trigger at the beginning of the next end step even if Agyrem is no longer the face-up plane card.
A plane card is treated as if its text box included “When you roll , put this card on the bottom of its owner’s planar deck face down, then move the top card of your planar deck off that planar deck and turn it face up.” This is called the “planeswalking ability.”