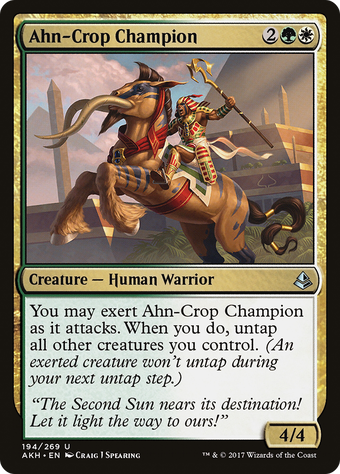 You may exert Ahn-Crop Champion as it attacks. When you do, untap all other creatures you control. (An exerted creature won't untap during your next untap step.)

Art minified Art full
Full image
If you attack with two Ahn-Crop Champions and exert both, each will untap the other.
If an exerted creature is already untapped during your next untap step (most likely because it had vigilance or an effect untapped it), exert’s effect preventing it from untapping expires without having done anything.
All cards in the Amonkhet set that let you exert a creature let you do so as you declare it as an attacking creature, as do some of the cards in the Hour of Devastation set. You can’t do so later in combat, and creatures put onto the battlefield attacking can’t be exerted. Any abilities that trigger on exerting an attacking creature will resolve before blockers are declared.
All attackers are chosen at once. You can’t attack with Ahn-Crop Champion, untap a tapped creature, and then attack with that creature.