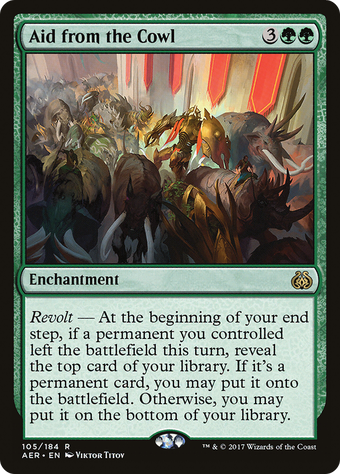 Aid from the Cowl

Art minified Art full
Full image
Revolt abilities don’t care why the permanent left the battlefield, who caused it to move, or where it moved to. They’re equally satisfied by an artifact you sacrificed to pay a cost, a creature you controlled that was destroyed by Murder, or an enchantment you returned to your hand with Leave in the Dust.
If the revealed card is not a permanent card or if you choose not to put it onto the battlefield, you may put it on the bottom of your library. If you don’t, it remains on top of your library.
If a permanent put onto the battlefield this way has an ability that triggers at the beginning of your end step, it won’t trigger during this end step.
Energy counters aren’t permanents. Paying won’t satisfy a revolt ability.