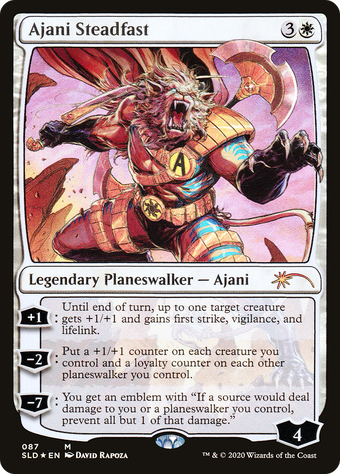 Pioneer
Modern
Legacy
Vintage
Penny
Commander
Duel
Art minified Art full
Full image
You may activate the first ability with no targets. If you do, you simply put a loyalty counter on Ajani to pay the cost of the ability.
The emblem’s ability doesn’t consider who controls the source dealing damage to you or a planeswalker you control.
If multiple effects modify how damage is dealt, the player being dealt damage or the controller of the permanent being dealt damage chooses the order to apply the effects. For example, Dictate of the Twin Gods says, “If a source would deal damage to a permanent or player, it deals double that damage to that permanent or player instead.” Suppose you would be dealt 3 damage while Dictate of the Twin Gods is on the battlefield and you control Ajani’s emblem. You can either (a) prevent all but 1 damage first and then let Dictate of the Twin Gods’s effect double that, for a result of being dealt 2 damage, or (b) double the damage to 6 and then prevent all but 1 of that damage.