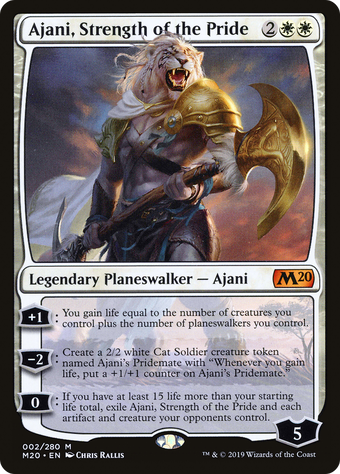 Ajani, Strength of the Pride

+1: You gain life equal to the number of creatures you control plus the number of planeswalkers you control. −2: Create a 2/2 white Cat Soldier creature token named Ajani's Pridemate with "Whenever you gain life, put a +1/+1 counter on Ajani's Pridemate." 0: If you have at least 15 life more than your starting life total, exile Ajani, Strength of the Pride and each artifact and creature your opponents control.

Art minified Art full
Full image
In a Two-Headed Giant game, life gained by your teammate won’t cause Ajani’s Pridemate’s ability to trigger, even though it will cause your team’s life total to increase.
If Ajani’s Pridemate is dealt lethal damage at the same time that you gain life, it won’t receive a counter from its ability in time to save it.
If a planeswalker you control is also a creature (most likely because it’s Gideon), it will be counted twice as Ajani’s first ability resolves.
Each creature with lifelink dealing combat damage causes a separate life-gaining event. For example, if two creatures you control with lifelink deal combat damage at the same time, Ajani’s Pridemate’s ability will trigger twice. However, if a single creature you control with lifelink deals combat damage to multiple creatures, players, and/or planeswalkers at the same time (perhaps because it has trample or was blocked by more than one creature), the ability will trigger only once.