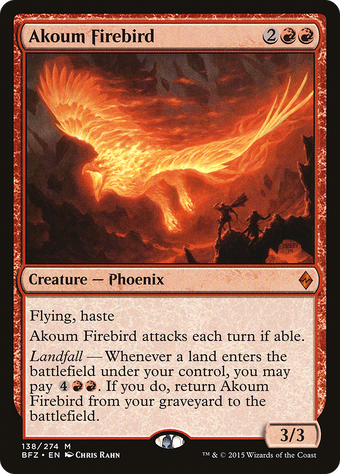 Pioneer
Modern
Legacy
Vintage
Penny
Commander
Duel
Art minified Art full
Full image
When a land enters the battlefield under your control, each landfall ability of the permanents you control will trigger. You can put them on the stack in any order. The last ability you put on the stack will be the first one to resolve.
Players can respond to the triggered ability, but once it starts resolving and you decide whether to pay , it’s too late for anyone to respond.
If, during its controller’s declare attackers step, Akoum Firebird is tapped or is affected by a spell or ability that says it can’t attack, then it doesn’t attack. If there’s a cost associated with having it attack, its controller isn’t forced to pay that cost. If they don’t, Akoum Firebird doesn’t have to attack.