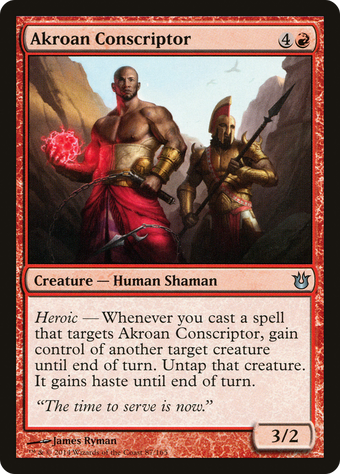 Pioneer
Modern
Legacy
Vintage
Penny
Commander
Duel
Art minified Art full
Full image
Gaining control of a creature doesn’t cause you to gain control of any Auras or Equipment attached to it. Notably, if that creature is enchanted by an Aura with bestow and dies while under your control, the Aura’s controller will continue to control the creature that Aura becomes.
Heroic abilities won’t trigger when a copy of a spell is created on the stack or when a spell’s targets are changed to include a creature with a heroic ability.
Heroic abilities will resolve before the spell that caused them to trigger.