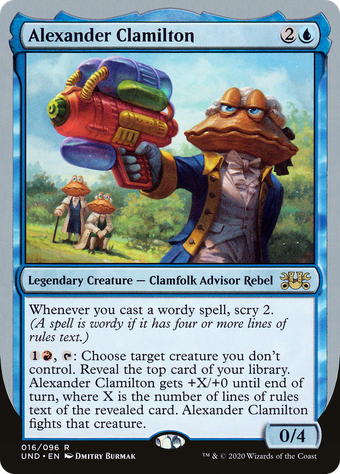 Whenever you cast a wordy spell, scry 2. (A spell is wordy if it has four or more lines of rules text.) {1}{R}, {T}: Choose target creature you don't control. Reveal the top card of your library. Alexander Clamilton gets +X/+0 until end of turn, where X is the number of lines of rules text of the revealed card. Alexander Clamilton fights that creature.

Art minified Art full
Full image
This card’s name is Alexander Clamilton.
There are a million things it hasn’t done, including count reminder text and flavor text. Those aren’t rules text.
Ability words themselves are not rules text, but they’re followed by rules text, so any line with an ability word will count.