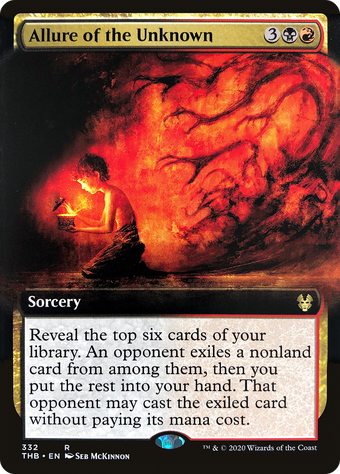 Allure of the Unknown

Reveal the top six cards of your library. An opponent exiles a nonland card from among them, then you put the rest into your hand. That opponent may cast the exiled card without paying its mana cost.

Art minified Art full
Full image
If you cast a spell “without paying its mana cost,” you can’t choose to cast it for any alternative costs. You can, however, pay additional costs, such as kicker costs. If the card has any mandatory additional costs, such as that of Thrill of Possibility, those must be paid to cast the card.
If all six of the revealed cards are land cards, your opponent doesn’t exile anything. You put all six cards into your hand.