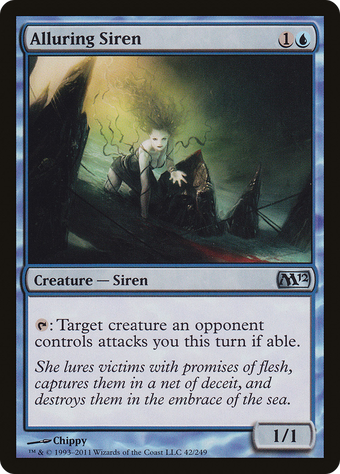 {T}: Target creature an opponent controls attacks you this turn if able.

Art minified Art full
Full image
After the ability resolves, the targeted creature attacks you only if it’s able to do so as that turn’s declare attackers step begins. If, at that time, the creature is tapped, is affected by a spell or ability that says it can’t attack, or is affected by “summoning sickness,” it can’t attack. If there’s a cost associated with having that creature attack, its controller isn’t forced to pay that cost, so the creature doesn’t have to attack in that case either.
Activating the ability during your opponent’s turn after attackers have been declared will have no effect. The same is true if you activate the ability during your own turn.