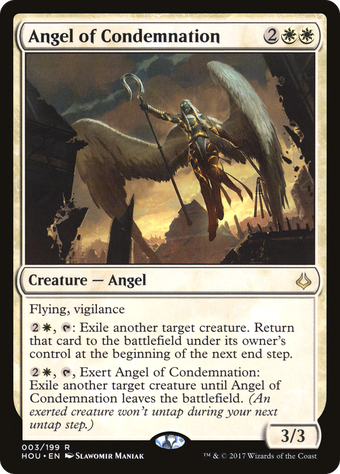 Flying, vigilance {2}{W}, {T}: Exile another target creature. Return that card to the battlefield under its owner's control at the beginning of the next end step. {2}{W}, {T}, Exert Angel of Condemnation: Exile another target creature until Angel of Condemnation leaves the battlefield. (An exerted creature won't untap during your next untap step.)

Art minified Art full
Full image Price history
Tapping Angel of Condemnation to activate either of its abilities while it’s attacking doesn’t remove it from combat.
If Angel of Condemnation leaves the battlefield before its last ability resolves, the target creature won’t be exiled.
If a creature token is exiled this way, it will cease to exist and won’t return to the battlefield.
You can’t exert a creature unless an effect allows you to do so. Similar effects that “tap and freeze” a creature (such as that of Decision Paralysis) don’t exert that creature.
If you gain control of another player’s creature until end of turn and exert it, it will untap during that player’s untap step.