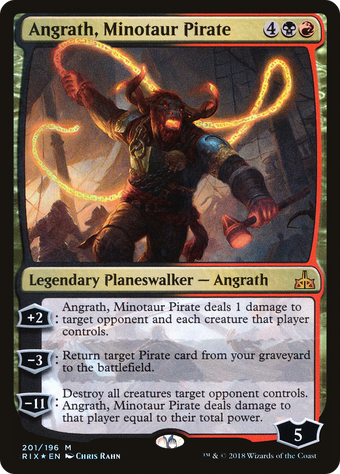 +2: Angrath, Minotaur Pirate deals 1 damage to target opponent or planeswalker and each creature that player or that planeswalker's controller controls. −3: Return target Pirate card from your graveyard to the battlefield. −11: Destroy all creatures target opponent controls. Angrath, Minotaur Pirate deals damage to that player equal to their total power.

Art minified Art full
Full image
If a creature controlled by the target opponent isn’t destroyed as Angrath’s last ability resolves (most likely because it has indestructible), its power still contributes to the amount of damage dealt. Use its power as it currently exists on the battlefield to determine the total power of the creatures.
Any abilities of the destroyed creatures that trigger when the player is dealt damage won’t trigger.
Angrath’s first and last abilities target only the player. Creatures with hexproof that player controls will be affected.