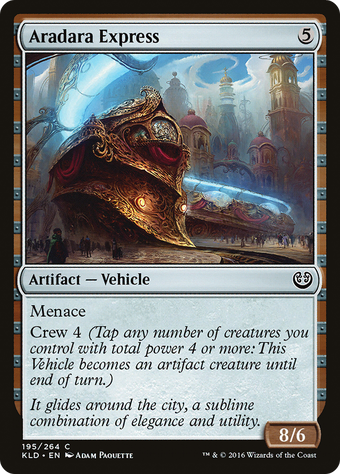 Menace Crew 4 (Tap any number of creatures you control with total power 4 or more: This Vehicle becomes an artifact creature until end of turn.)

Pioneer
Modern
Legacy
Pauper
Vintage
Commander
Duel
Art minified Art full
Full image
You may activate a crew ability of a Vehicle even if it’s already an artifact creature. Doing so has no effect on the Vehicle. It doesn’t change its power and toughness.
When a Vehicle becomes a creature, that doesn’t count as having a creature enter the battlefield. The permanent was already on the battlefield; it only changed its types. Abilities that trigger whenever a creature enters the battlefield won’t trigger.
Vehicle is an artifact type, not a creature type. A Vehicle that’s crewed won’t normally have any creature type.
Each Vehicle is printed with a power and toughness, but it’s not a creature. If it becomes a creature (most likely through its crew ability), it will have that power and toughness.
Creatures that crew a Vehicle aren’t attached to it or related in any other way. Effects that affect the Vehicle, such as by destroying it or giving it a +1/+1 counter, don’t affect the creatures that crewed it.
Any untapped creature you control can be tapped to pay a crew cost, even one that just came under your control.