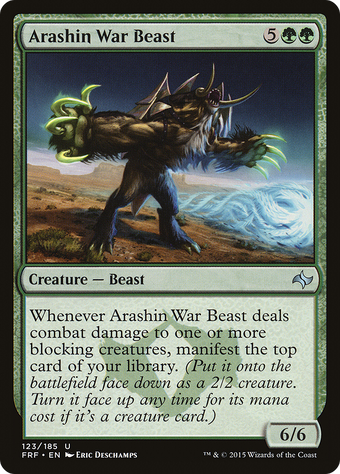 Whenever Arashin War Beast deals combat damage to one or more blocking creatures, manifest the top card of your library. (Put it onto the battlefield face down as a 2/2 creature. Turn it face up any time for its mana cost if it's a creature card.)

Pioneer
Modern
Legacy
Vintage
Penny
Commander
Duel
Art minified Art full
Full image
Unlike a face-down creature that was cast using the morph ability, a manifested creature may still be turned face up after it loses its abilities if it’s a creature card.
Turning a permanent face up or face down doesn’t change whether that permanent is tapped or untapped.
There are no cards in the Fate Reforged set that would turn a face-down instant or sorcery card on the battlefield face up, but some older cards can try to do this. If something tries to turn a face-down instant or sorcery card on the battlefield face up, reveal that card to show all players it’s an instant or sorcery card. The permanent remains on the battlefield face down. Abilities that trigger when a permanent turns face up won’t trigger, because even though you revealed the card, it never turned face up.
If a face-down permanent you control leaves the battlefield, you must reveal it. You must also reveal all face-down spells and permanents you control if you leave the game or if the game ends.
Because face-down creatures don’t have names, they can’t have the same name as any other creature, even another face-down creature.
Arashin War Beast’s ability will trigger only once per combat damage step, no matter how many creatures are blocking it.
Any time you have priority, you may turn a manifested creature face up by revealing that it’s a creature card (ignoring any copy effects or type-changing effects that might be applying to it) and paying its mana cost. This is a special action. It doesn’t use the stack and can’t be responded to.