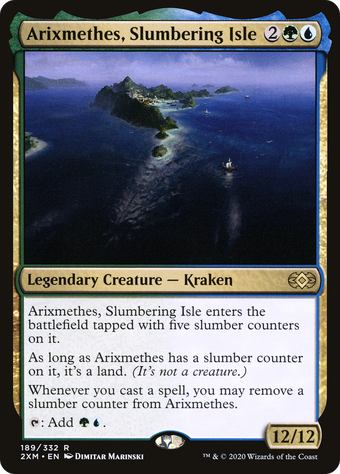 Freed from the Real

Legacy
Vintage
Commander
Duel
Art minified Art full
Full image
Once Arixmethes is a creature again, it can attack on the same turn as long as you’ve controlled it since your most recent turn began.
Arixmethes’s effect causing it to be a land overwrites any earlier effects that gave it additional types. For example, a Phyrexian Metamorph that copies Arixmethes will be a land, not an artifact land, until its slumber counters are removed.
Arixmethes can’t be played as a land.
Arixmethes can tap for mana the turn it enters the battlefield as long as it has slumber counters on it. If you can figure out how to untap it, that is.