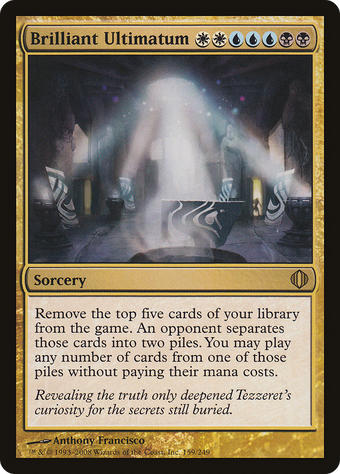 Exile the top five cards of your library. An opponent separates those cards into two piles. You may play lands and cast spells from one of those piles. If you cast a spell this way, you cast it without paying its mana cost.

Modern
Legacy
Vintage
Penny
Commander
Duel
Art minified Art full
Full image
You play cards from the chosen pile as part of the resolution of Brilliant Ultimatum. You may play them in any order. Timing restrictions based on the card’s type (such as creature or sorcery) are ignored. Other play restrictions are not (such as “Cast [this card] only during combat”). You play all of the cards you like, putting land onto the battlefield and spells on the stack, then Brilliant Ultimatum finishes resolving and is put into your graveyard. The spells you cast this way will then resolve as normal, one at a time, in the opposite order that they were put on the stack.
The cards are exiled face up.
If you cast a card “without paying its mana cost,” you can’t pay any alternative costs. You can pay additional costs, such as conspire costs and kicker costs.