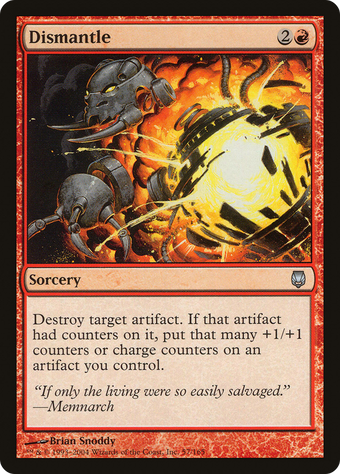 Modern
Legacy
Vintage
Penny
Commander
Duel
Art minified Art full
Full image
It doesn’t matter what kind of counters the destroyed artifact had on it, only how many. If an artifact had five fuse counters and two trap counters on it, you put seven +1/+1 counters or seven charge counters on an artifact.
Dismantle targets only the artifact that will be destroyed. When Dismantle resolves, you choose which type of counters you want and choose an artifact you control to put them on. No player make take actions between the time you make this choice and the time counters are on the artifact.