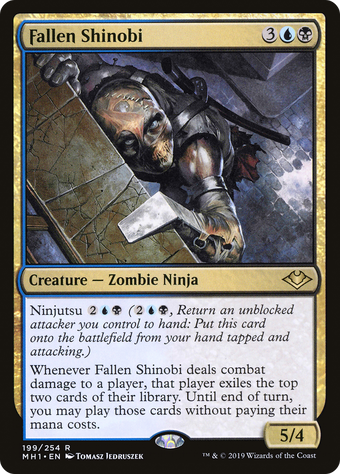 Ninjutsu {2}{U}{B} ({2}{U}{B}, Return an unblocked attacker you control to hand: Put this card onto the battlefield from your hand tapped and attacking.) Whenever Fallen Shinobi deals combat damage to a player, that player exiles the top two cards of their library. Until end of turn, you may play those cards without paying their mana costs.

Art minified Art full
Full image Price history
If a creature in combat has first strike or double strike, you can activate the ninjutsu ability during the first-strike combat damage step. The Ninja will deal combat damage during the regular combat damage step, even if it has first strike.
Fallen Shinobi’s triggered ability doesn’t change when you can play the exiled cards. For example, if a sorcery card is exiled, you can cast it only during your main phase when the stack is empty. If a land card is exiled, you can play it only during your main phase and only if you have an available land play remaining.
As you activate a ninjutsu ability, you reveal the Ninja card in your hand and return the attacking creature. The Ninja isn’t put onto the battlefield until the ability resolves. If it leaves your hand before then, it won’t enter the battlefield at all.
Any cards you don’t cast will remain in exile.
Although the Ninja is attacking, it was never declared as an attacking creature (for purposes of abilities that trigger whenever a creature attacks, for example).