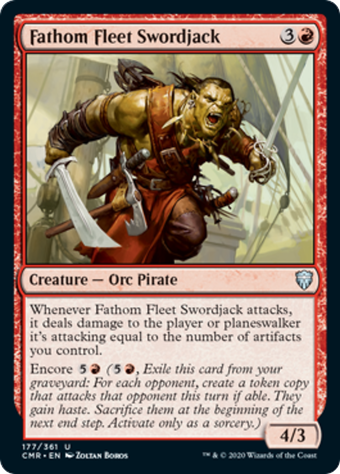 Whenever Fathom Fleet Swordjack attacks, it deals damage to the player or planeswalker it's attacking equal to the number of artifacts you control. Encore {5}{R} ({5}{R}, Exile this card from your graveyard: For each opponent, create a token copy that attacks that opponent this turn if able. They gain haste. Sacrifice them at the beginning of the next end step. Activate only as a sorcery.)

Art minified Art full
Full image
Opponents who have left the game aren’t counted when determining how many tokens to create.
If Fathom Fleet Swordjack leaves the battlefield after its triggered ability triggers but before it resolves, the ability will resolve as normal. The player or planeswalker it was attacking will be dealt damage. On the other hand, if it remains on the battlefield but leaves combat before its triggered ability resolves, no player or planeswalker is dealt damage.
If an effect stops a token from attacking a specific player, that token can attack any player or planeswalker, or not attack at all. If the effect stops the token from attacking a specific player unless a cost is paid, you don’t have to pay that cost unless you want to attack that player.
Each token must attack the appropriate player if able.