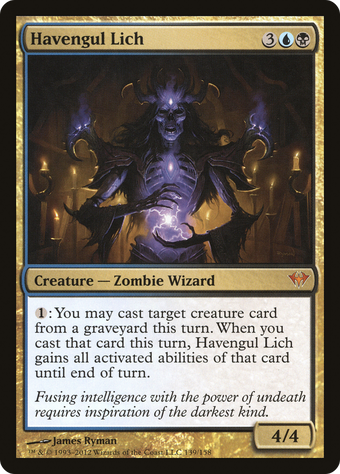 {1}: You may cast target creature card in a graveyard this turn. When you cast it this turn, Havengul Lich gains all activated abilities of that card until end of turn.

Modern
Legacy
Vintage
Commander
Duel
Art minified Art full
Full image
Havengul Lich gains the activated abilities of the card as it existed in the graveyard while that card is still a spell on the stack.
Havengul Lich’s ability changes the zone you are permitted to cast the card from, not the times you are permitted to cast it. You can cast a creature card that has been targeted by Havengul Lich from the graveyard, but unless it has flash, you can only do so if it’s your main phase, the stack is empty, and you have priority.
Havengul Lich’s activated ability creates a delayed triggered ability that triggers when you cast the creature card. This triggered ability will go on the stack on top of the creature spell and will resolve before the creature spell will.