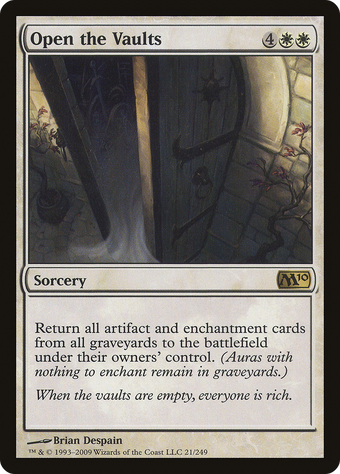 Return all artifact and enchantment cards from all graveyards to the battlefield under their owners' control. (Auras with nothing to enchant remain in graveyards.)

Modern
Legacy
Vintage
Penny
Commander
Duel
Art minified Art full
Full image
If multiple players have Auras in their graveyards, the player whose turn it is announces what their Auras will enchant, then each other player in turn order does the same, then all artifacts and enchantments (including both Auras and non-Auras) enter the battlefield at the same time.
If an Aura is put onto the battlefield without being cast, the Aura’s controller-to-be chooses what it will enchant as it enters the battlefield. An Aura put onto the battlefield this way doesn’t target anything (so it could be attached to an opponent’s permanent with hexproof, for example), but the Aura’s enchant ability restricts what it can be attached to. If the Aura can’t legally be attached to anything, it remains in its current zone.