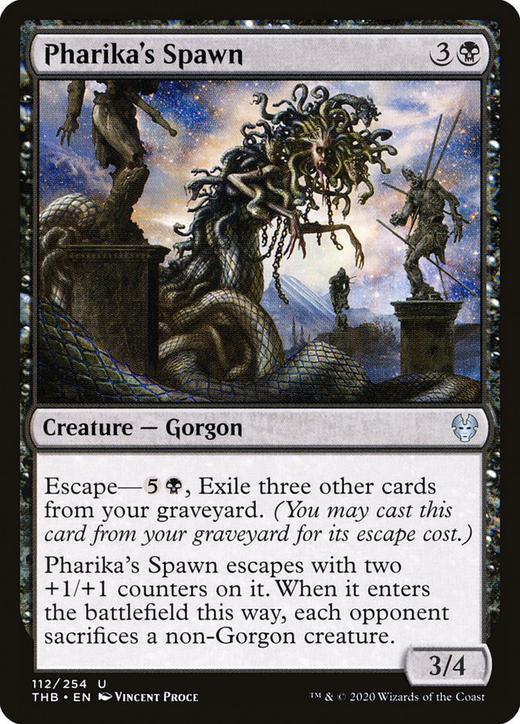 Escape—{5}{B}, Exile three other cards from your graveyard. (You may cast this card from your graveyard for its escape cost.) Pharika's Spawn escapes with two +1/+1 counters on it. When it enters the battlefield this way, each opponent sacrifices a non-Gorgon creature.

Art minified Art full
Full image Price history
To determine the total cost of a spell, start with the mana cost or alternative cost you’re paying (such as an escape cost), add any cost increases, then apply any cost reductions. The converted mana cost of the spell remains unchanged, no matter what the total cost to cast it was and no matter whether an alternative cost was paid.
If a card with escape is put into your graveyard during your turn, you’ll be able to cast it right away if it’s legal to do so, before an opponent can take any actions.
If a card has multiple abilities giving you permission to cast it, such as two escape abilities or an escape ability and a flashback ability, you choose which one to apply. The others have no effect.
As the triggered ability resolves, first the next opponent in turn order (or, if it’s an opponent’s turn, the opponent whose turn it is) chooses a creature they control, then each other opponent in turn order does the same, knowing the choices made before them. Then all the chosen creatures are sacrificed at the same time.