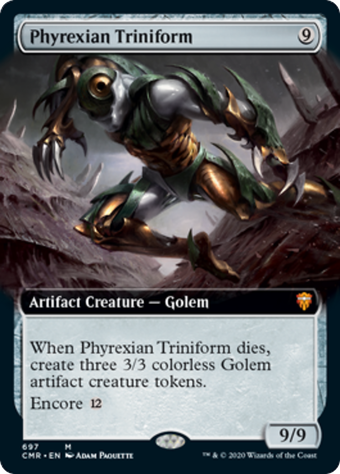 When Phyrexian Triniform dies, create three 3/3 colorless Phyrexian Golem artifact creature tokens. Encore {12} ({12}, Exile this card from your graveyard: For each opponent, create a token copy that attacks that opponent this turn if able. They gain haste. Sacrifice them at the beginning of the next end step. Activate only as a sorcery.)

Art minified Art full
Full image Price history
The tokens copy only what’s on the original card. Effects that modified that creature when it was previously on the battlefield won’t be copied.
If one of the tokens somehow is under another player’s control as the delayed triggered ability resolves, you can’t sacrifice that token. It remains on the battlefield indefinitely, even if you regain control of it later.
If one of the tokens can’t attack for any reason (such as being tapped), then it doesn’t attack. If there’s a cost associated with having it attack, you aren’t forced to pay that cost, so it doesn’t have to attack in that case either.
Exiling the card with encore is a cost to activate the ability. Once you announce that you’re activating it, no player may take actions until you’ve finished. They can’t try to remove the card from your graveyard to stop you from paying the cost.