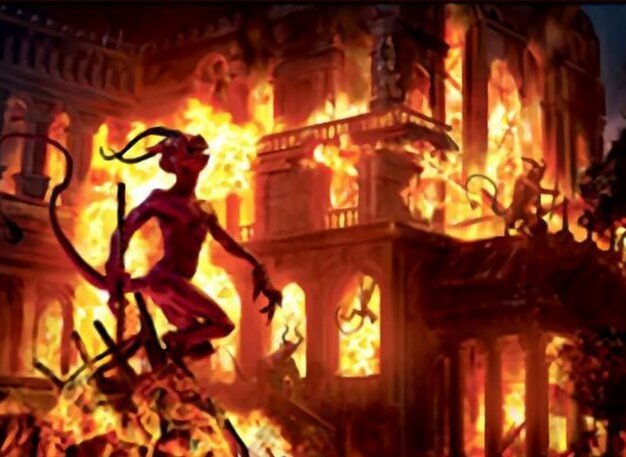 Today we'll talk about the three pillars of Innistrad Standard: Mono-Green Aggro, Mono-White Aggro and Izzet Turns, and the dilemma on dominance.

Edit Article
Today we are going to enter the wonderful world of Standard and the main decks of the format at the moment. More specifically, we'll talk about the rock, paper and scissors dilemma that has been taking place, having 3 decks that dominate the top 8s, and basically, we need to choose one of them to win. With the release of Innistrad: Midnight Hunt and the rotation of all sets prior to Zendikar, new archetypes emerged and others were updated, such as the case of Izzet Dragons, Mono White and Mono Green. I'll talk a little about the changes in the format so far and show some decklists on the rise (at the moment, the lists for the World Cchampionship have not yet been released).

Three decks seem to emerge in this early format, Mono Green Aggro, Izzet Turns and Mono White Aggro have been highlighted as an anti-mono Green which is, without a doubt, the main deck of Standard at the moment. They've received great additions from Innistrad such as Malevolent Hermit, Burn Down the House, Wrenn and Seven, Briarbridge Tracker, Intrepid Adversary and Brutal Cathar // Moonrage Brute. The largest tournaments so far, both on Arena and Magic Online, have been completely dominated by Mono Green, getting to be a contest to see who plays Esika's Chariot and Wrenn and Seven first, and ends up winning - usually, whoever starts on the play makes this combination first and wins. However, I believe the Izzet Turns has the potential to be a broken deck in the format. This deck uses two ways to win: playing Galvanic Iteration with Alrund's Epiphany and/or copying spells with Burn Down the House. Having the ability to cast 2 extra turns for 8 mana seems to me to be enough for the deck to be looked at carefully (2 mana from Galvanic + 6 from the extra turn with foretell) and it's this play that usually wins in non-mirror games with plenty of counterspells.

However, Galvanic's flashback ability makes the viable archetype one of the best in the format by allowing us to use extra turn + copy, playing 3 turns in a row and then Burn Down the House + copy to fill the board, making the victory imminent. Also, Hall of Storm Giants always show up to hit when we play 3 or more turns in a row, meaning we need to be at least 1 life with 8 lands on the board to combo and never allow the opponent to play again. But it's no use to keep trying to talk about the decks without having an idea of the lists that are running. Let's see below:

Mono Green's list was the champion of the latest SCG Championship, Mono White lists made top 4 in the same tournament and Izzet made top 8. I took the lists from this tournament not by chance, but because it was, until then, the main championship of the format until the World Championship. And what does the game of rock, paper and scissors consist of? Izzet Turns beat pretty much any midrange deck in the format, making it impossible for these archetypes to see play in the competitive scenario — sometimes some Storm the Festival deck manages to make some results, but not often.

To beat Epiphany decks, Mono Green is undoubtedly the best option because it can easily rush opponents with Werewolf Pack Leader, Old-Growth Troll and Esika's Chariot which is perhaps the best card of the format right now. As it, in addition to always making a 2-for-1 or 3-for-1 trades, can copy the Treefolk tokens created by Wrenn and Seven, and from there, the game gets completely out of control. This card always makes this 2 or 3 for 1 trade because, when entering the battlefield, it generates two Cat tokens, which usually means two or three removals are necessary to deal with it. The only case of a 1-for-1 trade is with counterspells - Disdainful Stroke and Negate are the most used at the moment.

Another card that is 2-for-1 except when countered and generates plenty of advantage in the late game is Ranger Class, as it creates a 2/2 token on ETB and makes some creatures grow each time it attacks, progressively increasing the pressure turn after turn, and it is very synergistic with creatures with trample. With most people wanting to beat decks with extra turns, Mono Green is naturally the best option and the most used in tournaments, and that brings us to the next card that has been surprisingly good in the format: Unnatural Growth.

It is the main mirror breaker for making any combat horrible for the other side. It's simply impossible to attack when your opponent's creatures double in size in every combat phase and puts too much pressure on the board in any game. And it's an enchantment, which means it's only answered by Izzet with counterspells. The last part of the rock, paper and scissors is Mono White. The deck has many small creatures to make early switches with Mono Green or to derail attacks in the first turns. There are also cards that break the game a lot, like Reidane, God of the Worthy, making all snow-covered land come into play tapped to break the curve, Skyclave Apparition, known as the best white creature in Magic, dealing with any nonland permanent with cost 4 or less, Brutal Cathar exiling any creature until it leaves the battlefield and Adeline, Resplendent Cathar, which has 4 toughness and generates tokens every time you attack, which means an infinite resource of chump blockers. Maul of the Skyclaves makes almost any attack unfeasible due to the artifact's first strike and only the W7's token has reach in the current lists. And there is also Portable Hole, a removal that deal with the Class, Werewolf or tokens... And what's the problem with Mono White? It's not good against Izzet, as much as slow them down with Reidane and Elite Spellbinder because the red removals are extremely effective against small creatures. It is also not that good against Festival decks, as Mono White can't respond to more than one threat at a time, meaning it can't deal with one or more bombs per turn. We are still not sure on how the World Championship metagame will be like, but I don't believe it will be so different from what happens in large Standard tournaments. Another detail is that this tournament will only have 16 players, so we will probably see few decks, maybe some innovation and certainly numerous techs for these main decks. That's it for today. Any questions, comments or feedback I'm available in the comments below Thanks for reading!!