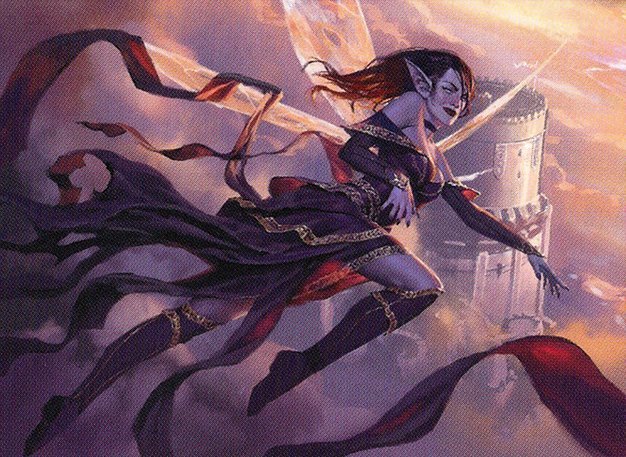 Following the Throne of Eldraine series

Hello my dears!  All right with you?  My name is Fogaça and I'm here again to talk about Commander. When I talked about Chulane, Teller of Tales, I said I was excited to hear about Brawl's pre-built decks, as well as trying to break my head to deconstruct their mechanics and extend the builds to another level. So today, following the Throne of Eldraine series, we will talk about another of the generals made possible by the collection: today is the day of dear Alela, Artful Provocateur.

Originally, our darling fae comes with a Mid-Control construction that abuses the synergy with flying creatures and takes a time stance, attacking and controlling during the game, but this greatly limits the options from the moment you skew the list. After much thought, I come, therefore, to propose an assembly that is Tempo as well, but with an idea that makes the pressure imposed by tokens something significant in a format where there are combos turn 0 - the answer found was simple: we will slow down the game.

For seasoned folks, just by eyeing Alela can be associated with a build storm with classic combos of the format, especially considering that Esper colors are possibly the best combination for tricolor. However, being a Kykar, Wind's Fury player (which would resemble a construction like the one above), I already say that the conditions are totally different, and there can be no such comparisons. Right after we drop a point where we try to use a lot of magic for a unique way to win, we can imagine a few different ways to achieve success in the month - this will require cards that combine a low mana curve and lasting effects. I thought, therefore, of an idea similar to pillowfort (an archetype that will be explained at a later time, but which basically consists of betting on several permanents with triggered effects that will generate value when aggregated), since we will slow down and  the potential use of game magic. Our goal here will be to achieve passive card buying, control, and damage effects so that, along with our Stax, pressure will be enabled that will shift opponents' focus from winning to not losing.

Understanding that we won't necessarily be explosive, we can move on to victory conditions. The continuous entry of creatures into the field opens the range for the use of Corpse Knight and Altar of the Brood (which is enhanced by the strong presence of gravehates in the list), and these conditions are not affected by our orbs or other effects likely to generate nonbos. Also seeking to circumvent mana unavailability, effects such as Bolas's Citadel can assist in a game progression, as well as being combined with cards like Sensei's Divining Top and Aetherflux Reservoir for a consistent win, even at an advanced stage of the game. Finally, the most unusual of our victory conditions will involve the synergy between Intruder Alarm and fairy creation as we play artifacts or enchantments; when we notice that our slowdown pieces do not increase the cost of spells, but only make their casting more laborious from tap mechanics, we open our minds to using cards like Retraction Helix and Banishing Knack and looping around and around.  the continuous cast of a zero cost artifact (which may involve mana generation by this means).

Finally, I would like you to note the individual potential of each card and how each one behaves in conjunction with others of the same function. Most of our card advantage fonts are derived from mana-less effects, and they remain on the table for reuse. Our tutors complement an effect close to the toolbox provided by colorpie that has consistent answers to any potential threat.

We are increasingly entering cases where the best cards are the best cards;  Unfortunately, there are cards with such an efficient mana cost compared to their effect that they end up having a high value.  However, as our deck has a game delay feature, some cards like Dark Confidant, Force of Will, and Chrome Mox, Mox Opal, and Mox Amber may be replaced with other pieces of stax to compensate for the lost value in the form from hate to other people's strategies.

After analyzing the arguments, it can therefore be concluded that we must not necessarily be influenced by options already established when assembling our lists. Often a consecrated archetype for a certain general is only the most popular and not necessarily the most complete or with the greatest potential. For today we stay here. Thanks to everyone who has been following this series of articles and I ask you always leave your feedback to keep improving. See you all next time, my dears!