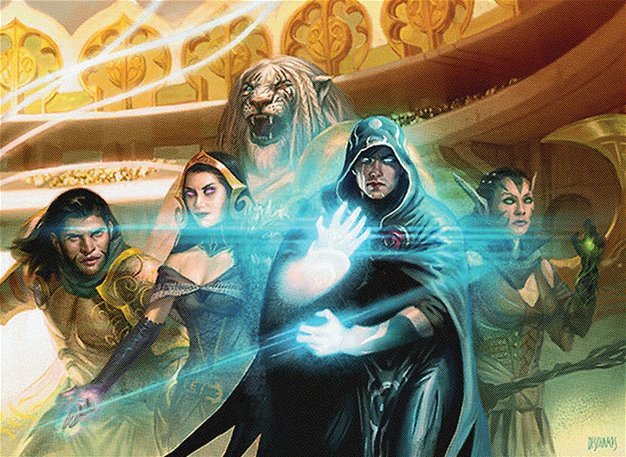 Today I'll discuss some commanders previously used as mana synthesizers, as a way to present more options to those who enjoy infinite mana combos.

Edit Article
Hello my dears! Is everything all right? My name is Fogaça and I'm here to talk about Commander. On the last article I have announced that we have entered the final stage of our series, which leads us to discuss some deckbuilding tendencies which appear on cEDH and which shouldn't be left out of our texts. Considering that, we'll have a special article for this season finale, where today's article and the one for the next week will be connected, bringing a worthy end to our conversation in these last months. For that end, today I'll discuss some commanders previously used as mana synthesizers, as a way to present more options to those who enjoy infinite mana combos.

When I was thinking about discussing this theme, I knew I would have to introduce it in a better way than simply throwing the commanders on the table and describe what they do but, in the end, that's our only option. Infinite mana combos are common characteristic in the format, having a huge diversity of sources and forms, from the simplest combos to the more complex ones, but, when I think about them, I also remember that classic play where a player reaches the greatly desired unlimited mana source and then passes the turn without a way to benefit from it. Thus, today's article will present options to players who prefer a strategy based on an infinite mana condition, having this loop as their objective, allowing their commander to solve the game based on that.

Basically, a legend which leads the deck which has the objective of generating infinite mana should be called a mana sinker and, thus, make use of this mana generation, be it colored mana or not. We may, thus, connect this thought to our first article, where we discussed Food Chain - on that occasion, our commander needed a favorable effect to enter or leave the battlefield or even during it's casting process. For today's list, I have selected a few commanders which integrate the main tiers of the format, with the objective of presenting options according to the different archetypes of the game, allowing a choice malleability for a diversity of players.

We'll start with one of the classics, already present on the format for some time now. Breya had her good and bad moments, derivating her build between the value and the proactivity of a fast combo. Today, we'll talk about this second option, as a infinite and colored mana combo solves our game plan: With Breya's own ability, we may sacrifice her and a thopter created by her, causing direct damage to the opponents and repeating the cycle, recasting her and activating her abilities to win us the game. For this combo to work, an explosive build with plenty of tutors and mana generators is necessary, as Breya is affected both my creature and artifact hates, in addition of demanding a combo in sorcery speed.

Entering now the more disruptive decks, we have the blue Archenemy. Urza is considered the best blue general of the format for his adapation on the environment he is, allowing him, as his predecessor Chain Veil Teferi, to impose a certain rhythm on the table, such as in a way to choose the moments where he wants to explode and find a play of value or get back and hold the opponents at bay. His ability to cast cards from the library may, at first glance, be considered a russian roulette, as you need to shuffle the deck to resolve it but, when connected to an infinite mana combo, this becomes a clear way to play the entire library and replay as a loop using Timetwister: play Stroke of Genius for X > 100 targeting an opponent and replay it again after Timetwister shuffle it back in your library. And, as Shezestriakus said in Reddit, Timetwister can be used with cards that would already be in the deck, you can with it: bounce all permanents; play Narset, Parter of Veils then wheel away opposing hands; make infinite constructs; and pass turn with Trinisphere in play. For a budget win condition, cards like Jace, Wielder of Mysteries and Thassa's Oracle can win by overdeck, while Nexus of Fate and Beacon of Tomorrows can win with infinite turns.

We have a lot of fuel to burn when we talk about Thasios, Triton Hero. I could stay here, writing for hours, dissertating about the innumerous variations that this companion allows but, between them, one thing is certain: Both to generate deck value and as a mana sink, Thrasios is essential, possibilitating, like Urza, a consistent finisher for a infinite mana condition. However, this time, we won't have the russian roulette factor. Instead, we also have card selection through a scry 1, allowing for the same options provided by our old grandpa Urza, but in an broader color pie and a greater consistence as a piece of individual card advantage.

Finally, we talk about our dear king, which characterizes, in my view, the maximum elevation of a single commander for the format. If Thrasios is excelent because of his aggregated card advantage, Kenrith is everything a cEDH player wishes for, allowing draws, buffs, life gains, reanimate and evasion for our creatures, becoming, thus, a unique piece for the format. To end the game with our monarch, we won't need an additional piece, like in the other cases, as the king himself does everything: Through a infinite mana condition, we can use his draw ability to draw our entire library and, with that, we may play any creature, like mana dorks, to grow them, grant them trample and haste and then use them to end the game through an attack, directing each of them (including Kenrith) to a different opponent, and using all of our library (now in our hand) to answer possible survival attempts by the enemy players.

Now it's official: Combining these two sections has become a tendency. Jokes aside, let's once more connect these two to present a list of options for you - I'll show you some commanders which may be effectively used through a infinite mana condition, thus giving more options to those who want to use this type of archetype and build around it. If you have any questions about how to use them, please post them in the comments section, and I'll try to assist you in your deckbuilding task.

CONCLUSION I know our previous articles had a more argumentative path than this one, which had a more expositive presentation, but this is due to the construction of our next text, which will end our series. For today, I want to leave a message that we need to analise the advantages and disadvantages of using a combo, regardless of each one, in relation to the build and the commander - it's easy to find infinite mana combos in many decks in a disconnected way where the following question might appear - are these really necessary? This is a thought for the next week. That's it for today. I ask you to leave your feedback so that we can always improve. The series aims to address only part of an entire sphere that covers an extremely diverse format, so I invite you to subscribe to my YouTube channel, where I talk about Commander, not only competitive, but also in other varieties, as well as about other formats. Until next time, my friends!