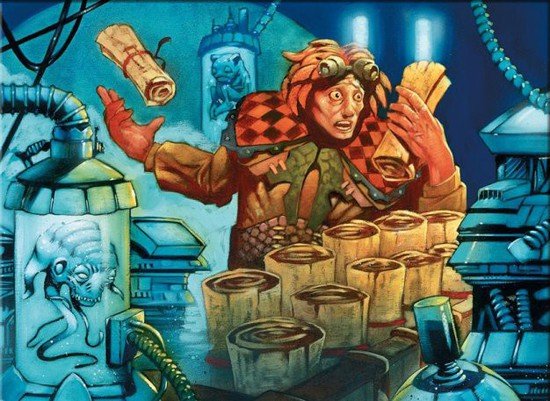 In today's article we'll explore tips and the many pieces required for a good sideboard in Penny Dreadful, in addition to our Recent Meta Summary and the decklists of recent tournaments.

The 4th weekend of Penny Dreadful's season 18 is ending with the next 10 weeks still to come (amount of time expected for the next rotation). Let's talk in today's article about a very important topic that can define matches, the sideboard. If you don't enjoy building a deck from scratch or if you like to create new decks but you think you still need more experience to do it efficiently, in order to help you I bring here the most used cards on the decks that are working, their proportions and also some ideas that may be used to generate more value from your post-sideboard strategy.

Before we start talking about the cards, it is important to reinforce the idea that a good sideboard is one which enables you to fight against several strategies effectively. Remember that you will normally exchange 4 to 7 cards between games, which are usually several copies of the same cards, as exchanging only 1 card will not make you buy exactly that card amongst the other 59 during the entire game. Maybe that's why many decks that made it to top1 have more focused and less diversified sideboards (using 2 to 3 sets of 4 cards to maintain a post-sideboard consistency). I think this is the[m] (first tip): focus your sideboard. Placing only 1 copy of a card to deal with each problem will not be effective. Exploring how the most used cards are at the current meta, below you will see a table with the top 100 most used cards so far in tournaments. Right away we see Tormod's Crypt, which has no cost to be played, being able to enter any deck to fight against the ones which use graveyard resources like Dredge, Reanimate-Turn-1-Win and even Cycling (used in the late game to disable Zenith Flare). It appeared in 67% of the lists and in 65% of the top 1 decks, usually in 2 to 4 copies. Another good option to deal with the opponent's graveyard which appears in the top 10 is the Nihil Spellbomb, and it also provides you with the option to draw a card for only 1 mana when sacrificing it. There are lists using Nihil Spellbomb on their main deck. As a great combos deterrent, Deafening Silence is widely used with 2 to 3 copies on the sideboards as well as the Ethersworn Canonist, which most of the time is already in the main deck. Another factor that kept the combo decks away from dominating the format were the possibilities of removing their pieces which are still in the deck such as Cranial Extraction, Memoricide, Slaughter Games and Stain the Mind. Going back to the graveyard hate, we have some possibilities like Tymaret, Chosen from Death and Cling to Dust that can even be played on the main deck. Another one that appears on the main decks a lot of times is Dryad Militant, a good option to use on White Winnie decks or even GW decks as well. Here I'll take the opportunity to bring you the second tip: If there are cards that you can use in a more volatile way in your main deck strategy, explore this. Cling to Dust is a good example, as it is less a graveyard hate that may be played in the main deck. You may get 3 life (great against aggros) or, in the worst case, you may draw a card (and you still have the Escape option). Another requirement for the sideboard in this season are cards that destroy artifacts and/or enchantments. With several Affinity decks in the metagame, every sideboard carries 2 to 4 artifacts and enchantments hate cards, which may be single target or global removal, depending on your deck strategy. Among the most common and which can provide more than one option are Feed the Swarm, Return to Nature and Fracturing Gust. In the line of artifact removal, we have: Smash to Smithereens, Vandalblast, Shenanigans and the global removals: Granulate, Creeping Corrosion and Purify. This season we had the possibility to experience a very fast game speed, including, as we will see below, the archetype that has won more times and with more decks in the current season, the Aggro decks, have an Achilles heel. Thanks to the gods, we obtained some low cost global removals: In red we have Pyroclasm and Slagstorm; In white, perhaps the most effective global removal of the format, Day of Judgment; In black some good removals are also strong as Yahenni's Expertise, Drown in Sorrow, Ritual of Soot and Consume the Meek.

hyperlink These are season 18's (Archetypes), counting only tournaments that happened before 10/29/2020. As planeswalkers appearing on the sideboards, we have Dovin, Hand of Control, Teyo, the Shieldmage and Gideon Jura, all focused on delaying or protecting your board until the development of the main strategy. Third tip: Don't leave your main strategy to become dependent on the sideboard. There are decks, like Merfolks, that don't use serious graveyard hate cards, as even though the deck is extremely fast, if a Reanimate wants to make something funny against Merfolks, there are cost 1 bounce effects and also counters that cost 1 as well. And this 3rd tip brings a very interesting discussion point: Do not think about how to hinder the opponent, but how you may obtain an advantage while developing your strategy. Examples: In a Burn deck the idea is to use direct magic on the opponent to kill them. If the player plays a lot of creatures you may end up dying faster than them and if they use creatures with lifelink you will also have problems. In this case Satyr Firedancer is a good sideboard choice, as it enables you to continue dealing direct damage while removing opposing creatures. Still in red, I've seen decks using Dragon's Claw against mirrors because they can gain life by themselves and by the opponent's red spells. Seldom explored ideas: Personally I like to test different things and some ideas that I managed to generate a lot of value with and which I don't see frequently being used are Guerrilla Tactics in Burn, since one of the options when someone attacks you directly is to use discard effects to remove their resources. Lightning Rift on decks that use red when facing Cycling decks to use the opponent's resources against them is also interesting. Finally, my current sideboard against Cycling and even against some combo decks uses Uba Mask, as the card will be exiled, and it cannot be cycled. Well, in general, I believe that Penny ends up having a hard time creating unique sideboards, as the format is not as static as others, which makes it more fun in my opinion. These are the most used cards, but there are countless others that are available. For this season I always follow this sideboard ratio and adjust it for each deck strategy: -> 3 to 4 cards to deal with graveyards; -> 2 removals of artifacts and enchantments; -> 2 to 4 combo-break cards; -> 2 to 3 creature removals and/or boardwipes; -> 3 or 4 life gain cards. Always remember that there are cards that meet more than one of these criteria, and you should also always respect the game line of your deck. As the fourth tip: What helps me a lot is to do reverse engineering. I usually get the decks that I have the most difficulty winning against and use them in some test matches. Playing with the deck you will be able to see their weaknesses and difficulties, like which resource loss affects it the most. This helps me both in choosing cards when building the sideboard and when starting to choose which cards will come in and which will come out between games. To conclude with a bit more information that may help you to adapt the sideboard of your decks, take a look at how Penny's games are happening recently, and which decks are harder to be fought against. ---RECENT META SUMMARY--- With a smaller participation of players, we saw a mastery of Izzet colors, with Affinity played by the Brazilian ravage.pe, who took 3 top1, and Izzet Drakes from Honourbound84, who conquered one top1 and one top2, amongst 4 of the 6 tournaments in the analyzed week.

Another deck that appeared a lot was also Reanimate-turn-1-win, appearing 4 times at the top. In general, the top8 were well diversified, with few RDWs and Burns. Merfolks piloted by the Brazilian Shadowater0 made top1 again just like a UB Storm. Dredge, Mono Blue delver, Esper Control and Rakdos Aristocrats appeared twice each: Here are the link to the tournaments that took place each day: Thursday, 10/22 PD FNM, 10/23 Saturday afternoon, 10/24 Sunday, early morning, 10/25 Sunday afternoon, 10/25 Monday, 10/26 Related to the colors, we have the presence of blue increasing a lot in these tournaments, while black has been greatly reduced. Red has remained close to 50%. Is Izzet the new deck to be fought against? DECKLISTS: 3 times at 1st place, the player ravage.pe played with this Izzet Affinity. We had already showed a list of Izzet Affinity, so what is different? The card hated by every Pauper player: Fling

Created with the name "Jokulhaups-Superfriends", this deck makes reference to PWs. However, I believe it is also a pun, since everyone loves Jokulhaups, hehehe:

How about winning without attacking, just by casting spells? This is the objective of this very fun Five Color Shrines deck:

As the Control decks are gaining more space, I present to you a Kefnet Control:

We're done here for today, but I want to know: What do you think? If you have any theme or subject you want to know more about in Penny, leave it here in the comments section or in the Feedback form. 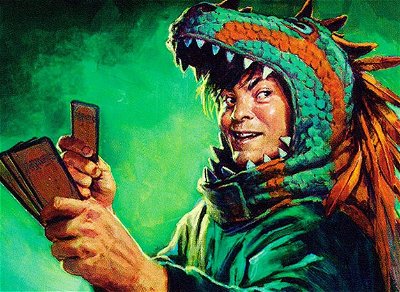 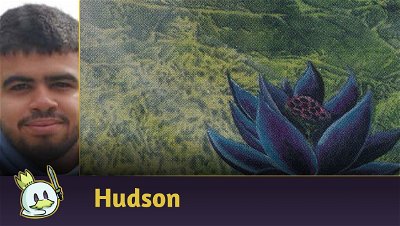 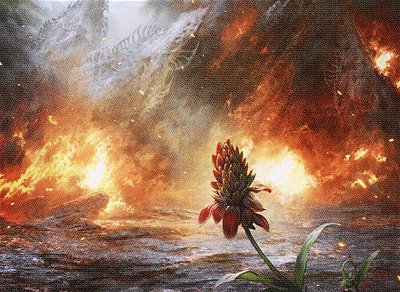 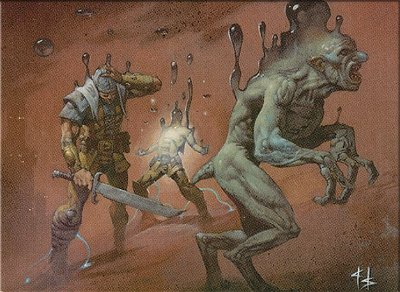 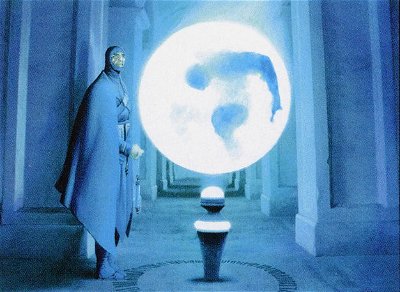 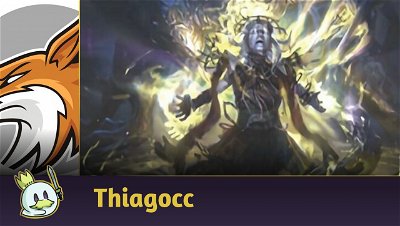